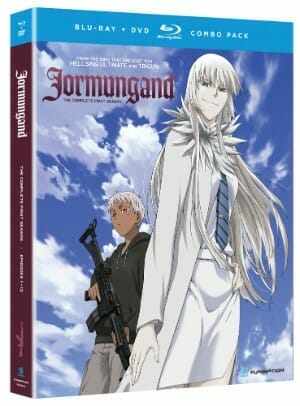 Let’s be honest: everyone loves the charismatic bad guy.

Throughout history, humanity has shared a fascination with the darker side of society. It’s reflected in our popular fiction, which is brimming with countless tales of charming rogues, charismatic conquerors, and enigmatic evildoers. Whether it’s A Clockwork Orange‘s Alex, Star Trek‘s Khan Noonien Singh, or Death Note‘s Light Yagami, these characters have a way of worming their ways into the hearts and minds of audiences around the globe. It seems only natural that there are countless works of fiction that delve into the seedy world of the “bad guys”, where morals are relative and the law is only as powerful as the gun backing it up. It’s through this lens that viewers are exposed to the world of Jormungand, where the underworld is as familiar as one’s own backyard.

Jormungand focuses on the life of Jonah, a child soldier from an unknown land. After his family was wiped out in a fighter plane strike, Jonah vowed to destroy those who would bring such instruments of death into the world. Fate, though, is a fan of irony. Through unusual circumstances, Jonah finds himself in the employ of international arms dealer Koko Hekmatyar. On the surface, Koko is a charming woman who sports a bubbly, sometimes childish demeanor. When asked, she claims to sell weapons “to promote world peace,” almost as if she were a naive fool. Her sunny disposition and goofy mannerisms belie her true character, though. Koko’s made a name for herself as a ruthless negotiator and a shrewd dealer, whose trademark smile never leaves her face, even when under the heaviest of fire. She surrounds herself with an elite crew of bodyguards, whose accolades are the stuff of legends. It’s with this crew that Jonah travels, as Koko travels from client to client. The people Koko meets, and the firefights that seem to always follow serve as a backdrop for Jonah’s new existence. 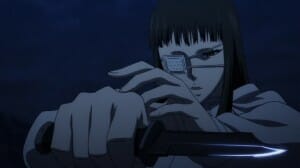 At its core, Jormungand is a politically charged action series, where Koko Jonah is but a witness to Koko’s dealing of weapons that often shift the balance in wars between powerful nations. Every deal, every job is a tightly woven experience that blends the world of politics and business with the inevitable firefights between those who deal death on a daily basis. There are undertones of larger machinations, but they never seem to undermine the experiences occurring in the here and now. Instead, they complement and enhance the experience, and make the world the characters inhabit seem all the more real.

When the bullets aren’t flying and the deals aren’t on the table, though, the show adopts a surprisingly laid back stance. With a tone that mirrors many slice-of-life shows on the market, Jormungand seems to really revel in its more mundane experiences. Simple moments, like mealtimes and shopping trips, are spiced up by friendly jokes and surprisingly funny visual comedy. The light-hearted segments play wonderfully off of the more serious moments, creating a clear contrast that really sells the idea that, while Koko and her crew are black-market arms dealers, they’re far from inhuman monsters.

The experience is truly brought to live by a charming cast. Koko and her band of bodyguards are a bunch of lovable rogues, who are able to worm their way into the hearts of even the most hardened audience with their quirks and eccentricities. Koko herself, while a skilled negotiator and fearless actor, is prone to over-dramatic outbursts, complete with flailing gestures and goofy factial expressions. Lehm, in contrast, is a laid-back operator whse charming smile and dry sense of humor belie the skills of a master sniper. And then there’s Valmet, whose one-sided romance toward Koko hides her true ferocity and knife skills. 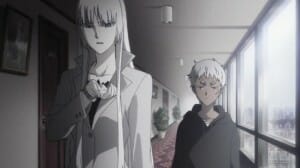 Similarly, the antagonists that Koko and company face are charmismatic, fascinating individuals. Like Koko and company, they’re not necessarily evil, but instead reside in the moral grey area. They’re ruthless players that aren’t afraid to do horrific things, though they also show a depth of character that begs a closer look. Whether it’s the arrogant, yet resourceful CIA Agent Scarecrow, the or the ruthless arms trader Guoming Chen, the majority of the show’s antagonists are intriguing individuals who just beg to be explored.

The show is tied together by a visual style that proves to be as attractive as it is gruesome. Exotic landscapes, from German villages to African war zones, are brought to life with a clean visual style that simply gushes with personality. Each location has a wonderful, lived-in feeling that makes fantastic use of color. The character designs are interesting, in the sense that they revel in their imperfections. There are no supermodels, in the sense that no single character fits cleanly into the “sex object” category. Characters like Valmet and Lehm proudly wear their scars and their injuries, while Koko herself is typically wearing a twisted Cheshire Cat-like grin that is equally unsettling as it is intriguing. The mercenaries, as lively as they are, have the thousand yard stares of those who have seen hell, their irises blank and emotionless in comparison to those of the non-combatants in the series. The show’s animation is impressive, especially in the heat of battle, where bullets fly and blood spatters like paint in gorgeously choreographed segments. Valmet’s knife-work is particularly fun to observe, as it seems more like a gory dance at times than a straight-forward battle.

Jormungand is one of those rare shows that just commands attention from onlookers. The show’s blend of charming characters, political intrigue, and white-knuckle action is instantly appealing, and ensures that viewers will be crying for “just one more episode” until the final credits roll.