US Distributor: Sentai Filmworks
Production Studio: Zexcs
Was this provided by the publisher? No
More Info: Anime Planet 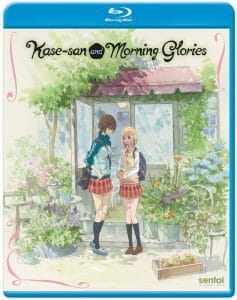 In the past, I’ve had the pleasure of reading several manga titles by Hiromi Takashima, especially her first work, Kase-san and Morning Glories. The title was the first in a series of manga books, which focuses on a romantic relationship between two high school girls: the shy, timid, “girly girl” Yamada, and tomboyish star athlete Kase.Notably, the series begins with Kase and Yamada already in a relationship. Rather than take readers through the whole “will they, won’t they” waffling that culminates in a schmaltzy confession. It really is a breath of fresh air, that does away with so many overplayed tropes.

But still, the focus of the OVA is on character relationships, and how those develop (or bloom) over time. Gardening is a hobby Yamada does at school, and it serves as a metaphor for the growth and development of her relationship with Kase-san. Their relationship isn’t entirely  one-sided, as Kase has similar feelings for Yamada in kind. It’s a clever swerve, which sidesteps the  case of unrequited love due to one member being totally oblivious, which seems to be a staple dramedy trope at this point.

The OVA, itself, is essentially a series of small vignettes that following the story format of the manga. In each, the precious cinnamon rolls that are Yamada and Kase engage in pleasant and wholesome everyday events, like hanging out at school or taking a class trip to Okinawa. Each of the segments is delightfully heartwarming,  and laced with intimate moments between the two girls. When a conflict arises that threatens to separate the girls, one can’t help but be on pins and needles right along with them as they work through their strife, and feel a sense of joy when they manage to overcome their issues through the power of undying love.

Kase-san and Morning Glories is a brisk watch, clocking in about an hour. Its length serves the story well enough, to the point where it’s not too short as to be forgettable, but not long enough to overstay its welcome. The soundtrack by rionos helps to set the mood of the scenes quite nicely, while ending credits song Asu e no Tobira (Door to Tomorrow) by Ayane Sakura and Minami Takahashi is simply lovely.

On a technical level, the feature looks simply marvelous. The background art has a charming watercolor painting look to it, which is complemented by soft yet expressive character designs and slick animation.

For this release, Sentai Filmworks crafted what is arguably one of their strongest English dubs to date. With David Wald at the helm, Bryn Apprill and Morgan Berry put forth outstandingly natural performances, which were buoyed by a strong script by Marissa Lenti.

Overall, Kase-san and Morning Gloriesis a solid addition to any fan who’s into romantic dramedies or yuri titles. It’s hard to watch this hour-long OVA and silently hope that it will lead to a full-on TV series someday.  It’s a fantastic standalone work, which serves as an even stronger companion to Hiromi Takashima’s delightful original manga.