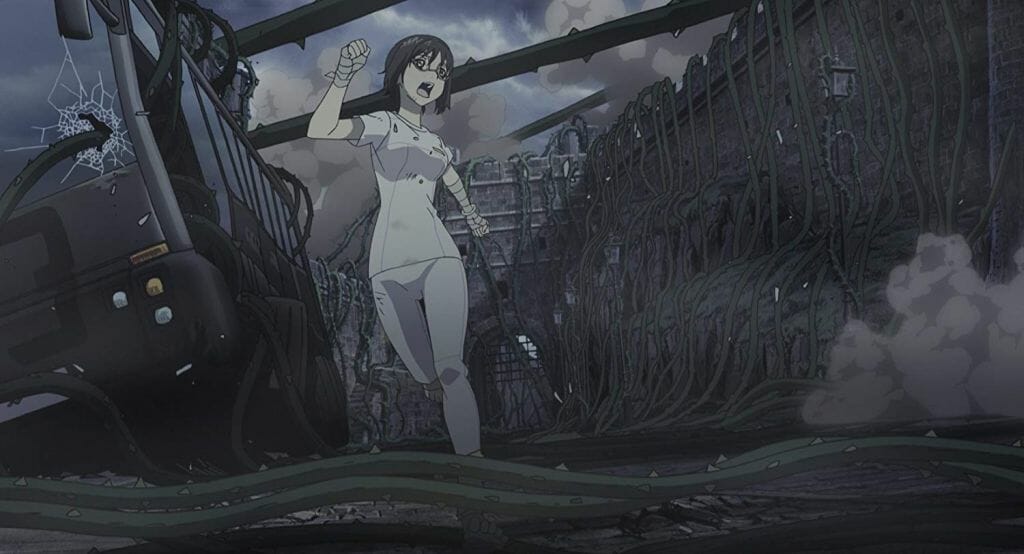 Sci-fi horror is a genre that’s befuddled me for ages. I can understand the appeal, that often scientific progress into the unknown often has terrifying implications. Mary Shelley exemplified this in Frankenstein and H.P. Lovecraft, for all his flaws as a person, was a master of exploiting the unknown in his Cthulhu mythos. Too often, though, creators tend to revel in the gorier horror aspects over the more cerebral sci-fi elements. This has long been a deterrent for me, and it’s turned me away from numerous works like Rin: Daughters of Mnemosyne and Another. With this in mind, I was reluctant to dive into King of Thorn. Still, I’m glad I took the plunge, as the experience proved to be surprisingly pleasant.

In the distant future, mankind appears to have met its match against the mysterious Medusa Virus: a disease which causes death by petrification. Viewers are given a front-row view of how the illness works in the film’s grisly opening segment. As luck would have it, though, biotech corporation Venus Gate has a cryogenic facility that was developed for just such an occasion.

Because of course, they do.

This new-age Noah’s Ark exists under the project name “Operation Sleeping Beauty,” in a totally-not-obvious nod to the fairy tale of the same name. The program’s inaugural members are the expected team of experts: a bunch of high school kids, a Sleeping Beauty fangirl, a temperamental guy, and some pompous Italian senator.

At their high-tech sleepaway camp orientation, the group gets a brief rundown of what will happen to them as part of Operation Sleeping Beauty. An AI nanny known as ALICE will monitor their conditions over the next hundred years, which will hopefully grant enough time for researchers to develop a cure to the Medusa Virus.

Everything seems to go swimmingly, at first. A girl named Kasumi awakens early, though, and finds the entire facility infested with thorns. A horde of mysterious beasts attacks soon after, leaving just seven trapped, with ALICE out of commission and no means of reaching the outside world. What happened to Operation Sleeping Beauty, and how can they survive the nightmare in which they find themselves?

Sarcasm aside, The King of Thorn’s storytelling is surprisingly effective throughout the course of the film. The use of news handled well, and provides plenty of opportunities to provide much-needed exposition dumps without being overbearing. Exposition trickles in at a workable pace, and bits of mythology like the tale of Noah’s Ark are deftly woven into the narrative.

The film’s early horror trappings fall away quickly, allowing the more cerebral aspects of the story to take center stage. Suspense is masterfully built, as writers Hiroshi Yamaguchi and Kazuyoshi Katayama treat the characters like they would in a “whodunit” mystery like Agatha Christie’s And Then They Were None. Cast members’ fears and biases are brought the fore, and the greater mystery lingers just out of reach.

Characters show real depth, as they grow and change over the course of the story. Every character gets some time in the spotlight, and enough of a backstory to intrigue the audience.

I should note, though, that this is still a sci-fi horror film, and there is a fair amount of gore. If I had to compare to other anime features, I’d liken the experience to Rin: Daughters of Mnemosyne and Dead Space: Extraction. Folks who can’t handle squick might want to look elsewhere for theri sci-fi fix.

On a production level, The King of Thorn truly excels. The film, which was produced by Sunrise, features an array of gorgeous setpieces and action scenes, with clean animation and generally strong CGI work. That said, there is one sequence, which features a chase and a battle, that looks like it was ripped from an early 2000s video game like Resident Evil: Code Veronica, or Echo Night Beyond.

Funimation went all-out in producing a strong English dub. Director Christopher Bevins does fall back to having the cast put on various accents in their roles, but the actors manage to pull it off. Patrick Seitz was stellar as Marco Owen, and also served as a fantastic scriptwriter who managed to preserve the spirit of the source material in his work.

The King of Thorn is a fascinating experience. What begins as a bog-standard sci-fi horror flick quickly grows into something bigger and deeper than it should. And, considering what some of the shows I’ve tackled before this, the film served as a good palate cleanser.