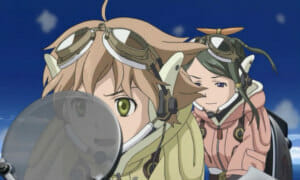 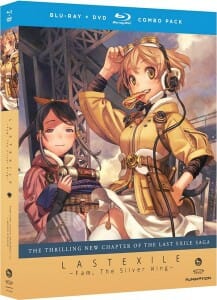 Last Exile: Fam, The Silver Wing is a politically charged military drama. It blends sci-fi and fantasy elements through depicting a world that relies heavily on aviation. The main focus of the series is on sky battles fought between warring nations. The series showcases different aircraft designs and derives its story from the actions of the characters flying within them.

The Ades Federation has gone on the offensive and attacked the Kingdom of Turan using the mysterious technology of Exile. Now, with her family gone and her kingdom in shambles, Turan’s youngest princess finds herself teaming up with Fam, a rambunctious girl sky pirate and protagonist of the series. Fam only dreams of flying through peaceful skies. She and her friends must find a way to stop the fighting to have any chance of Fam’s dreams coming true.

Despite being a sequel to Last Exile, the story has very little to do with its predecessor. It takes place in the same universe and has multiple character cameos, but none of them play much of a role in this new chapter. The entirety of the first series is crammed into a single recap episode, so as not to leave new viewers in the dark when it comes to explaining the supernatural elements of the setting. 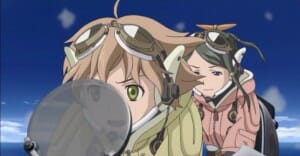 Scores of names and terminology are thrown about, and viewers are expected to keep up as new characters and countries are introduced through the series. While the large cast helps to flesh out the many people affected by the war, the vast majority of characters receive little to no development. Viewers learn their basic personalities, along with their views and motivations when it comes to the war, usually in the form of a few flashbacks. This even applies to the heroine Fam, who acts as an upbeat pick-me-up to everybody around her, and rarely wavers from that role. This becomes a hindrance, as it becomes difficult to relate to, cheer for, or even take sides with anyone besides Fam and her affiliates.

Since the characters are unable to drive the series on their own, the focus quickly shifts to the actual trail of events that make up the plot. Power struggles, alliance betrayals and sudden casualties are not very unpredictable in a show like this, yet the series remains very well paced, and builds either suspense or emotion when necessary to keep the story moving forward. 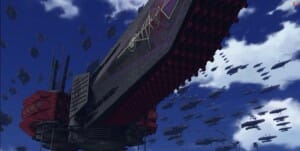 Much of the show’s action takes place in large-scale battles between fleets of warships. Commanders bark orders from the bridge, and receive damage reports shortly afterwards.

The art style of the show isn’t particularly unique, aside from the copious use of CGI. All of the air vehicles, and explosions, pieces of the backgrounds, and even characters during the more dynamic flight shots are animated with CGI effects. Unfortunately, the smooth alien textures of the aircrafts clash with the 2D characters, and is immediately jarring. While this combination might take some time to get used to, it’s obvious that many of the flight sequences couldn’t have been reasonably achieved without it.

Last Exile: Fam The Silver Wing sits in a middle ground between offering little to no insight on the characters from the first series but offering a new set of characters that don’t have much appeal on their own. The show separates itself so far from its previous installment that it can’t act as a proper sequel. So, while it tries to stand on its own as a niche show for fans of fantasy military drama, the many ties ins and shout outs to the original get in the way.