Love Live! Sunshine!! The School Idol Movie Over the Rainbow 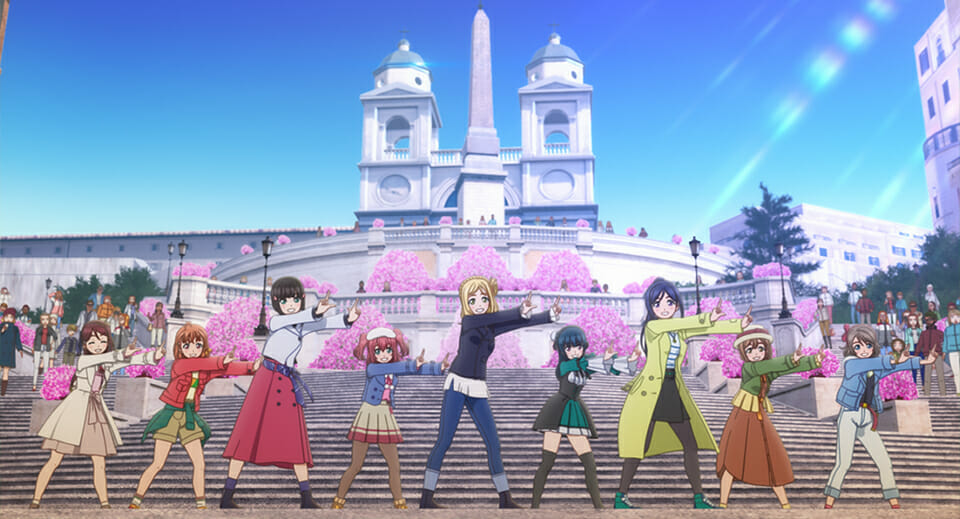 US Distributor: Funimation
Production Studio: Sunrise
Was this provided by the publisher? No
More Info: Anime Planet 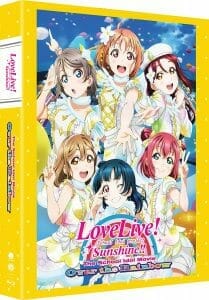 There’s something unmistakably bittersweet about a well-executed finale. While a well-executed send-off can certainly lift an audience’s spirits, it will always be colored by the melancholic knowledge that it is very much the end. It’s a farewell, as much as a beginning, as the viewer’s view into the world ends, and the theater of the mind takes over. In the case of Love Live! Sunshine!! The School Idol Movie Over the Rainbow (Love Live! Sunshine!! The Movie, henceforth), it’s hard to let one’s imagination a bit wild, as Aqours’ era comes to a close.

Love Live! Sunshine!! The Movie begins with an ending, of sorts. Dia, Kanan, and Mari, the third-year members of school idol group Aquors, are graduating from high school. Their futures wide open, they set their sights to the lives that lay ahead. Meanwhile, Chika, the de facto leader of the second-year team, finds herself grappling with the rigors of classes, as she struggles to find a way to make Aquors continue to work.

Life has a way of moving forward. Time passes, and Chika does her best to help her classmates adjust to the dilapidated Seishin High School. One day, like a whirlwind, a helicopter descends before the Aqours crew, as Mari’s mother emerges with dire news. Mari, Dia, and Kanan have gone missing, and their last known whereabouts were in Italy.

Thus begins Aqours’ greatest adventure yet, as they bring their brand of song and dance to Europe as they seek their lost friends, and maybe some insights into what the future holds for themselves, as well.

As this is a direct sequel to the Love Live! Sunshine!! TV series, there are few inroads for newcomers to the franchise. Characters get little introduction, and it’s assumed that everyone in the audience has had at least some exposure to Aqours’ tale.

That said, it’s hard to shake the feeling that the members of the former third-year class are under-utilized. Though Kanan, Dia, and Mari get a musical number in the film, it feels a bit superfluous, as the characters are generally relegated to the background. And while this ties into the film’s themes of “passing the torch” and finding the positive when all seems most hopeless. one can’t help but miss the characters’ presence.

Love Live! Sunshine!! The Movie boasts six musical routines across its hundred-minute run time, lending a Disney-esque feel to the overall experience. Of the numbers, the strongest would arguably be Believe Again by rival idol group Saint Snow. The hard rock edge and shredding guitars provide a stark contrast to Aqours’ melodies, and the catchy chorus is nothing short of infectious. That said, while the musical interludes are enjoyable, for the most part, many feel superfluous in the grand scheme of things, as they’re just “there”, and really don’t do much to move the story along.

For the Love Live! fan, Love Live! Sunshine!! The School Idol Movie Over the Rainbow is a pleasant sendoff to the characters they’ve come to know and love. While the overall experience is a bit schmaltzy and superficial, it’s hard to deny that even the most die-hard of fans will find something to enjoy in this final romp with Aqours.