Lupin the Third: The Woman Called Fujiko Mine 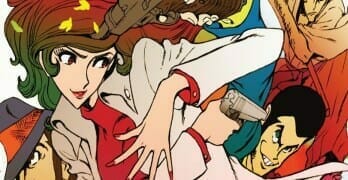 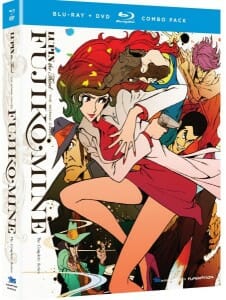 In Japan, Lupin has been a household name since he made his bombastic debut in 1967. The tales of his grand heists and incredible capers enthralled fans of all ages, as he’s crossed paths with the law in all of its forms. Be it the vigilant Zenigata to the great Detective Conan, Lupin’s always found his way to get what he wants, when he wants.

Of course, he doesn’t always do it alone.

Over the years, Lupin amassed a small gang of compatriots that are sometimes convenient friends, and sometimes bitter rivals. Possibly his best known, though, is Fujiko Mine: a femme fatale and mistress of the long con, whose beauty is second only to her lust for the finest things in the world. She’s a mistress of disguise that will use everything, from her wits to her body to get what she wants. Her stories are numerous, and her capers are said to be as grand as those of Lupin himself.

Lupin the Third: The Woman Called Fujiko Mine delves into the past of the world’s greatest cat burglar to deliver a dozen episodic tales from her solo career. Through the series, Fujiko’s skills in both the deadly arts and otherwise are put to the test as she sneaks, schemes, and screws her way to infamy. Her exploits take her across the globe, from the casinos of Monte Carlo to the intimate confines of an all-girls’ academy as she stakes her claim on the world’s most precious treasures.

Along the way, she’s greeted by familiar faces and legendary adversaries. Those whom she’ll one day regard as comrades are little more than adversaries at this point, and those whom Fujiko can trust are few and far between. if there is one constant to be counted on, though, it’s that Zenigata was always, and always will be hilariously inept at his job.

That said, the show is a far cry from the Lupin many are familiar with. The slapstick comedy and cheery atmosphere of the iconic 1977 series are gone. In their place are a tone that would be more at home in, say, Cowboy Bebop, Black Lagoon, or the original Lupin comics. The characters, and the plots are all played straight, with moments of brief levity that break the tension of the moment. The scenes are often left to speak for themselves, as characters scheme and plot, and rivalries boil over into rage and frustration. 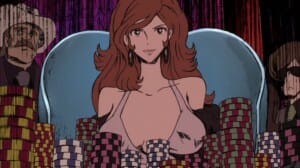 To tap into this new, restrained take on the Lupin universe, many of the show’s key players needed to be looked at from a different angle. Familiar faces like Jigen, Zenigata, and Lupin are distilled to their very essences. Unlike the familiar caricatures, these characters are instead portrayed as exceptional, albeit flawed individuals. They have their own weaknesses and demons, though they hide behind flawless facades. Fujiko, for example, is portrayed as a far darker individual, who will deceive, seduce, and kill to get what she needs. She’s powerful, confident, and crafty, though her instincts are easily clouded by the targets before her. The cast members simply gush with personality, and the chemistry between the major players is simply divine.

The first thing that most people will notice when watching The Woman Called Fujiko Mine, though, is the show’s sense of style. The series presents itself in a gorgeous, sketchy style that captures the show’s darker nature. Characters and objects are drawn with thick lines and bold colors. Heavy black lines are feathered onto scenes to create shadows and pull focus to the foreground. Landscapes look as if they could be watercolor paintings, with bleeding colors, and scribbled lines that give the illusion of depth in the scene. The overall effect is stunning, as it creates a look that could have easily been ripped from the pages of Monkey Punch’s original books. Action scenes are beautifully choreographed, and always exciting to behold.

Lupin the Third: The Woman Called Fujiko Mine is a rare gem that’s able to deconstruct a legendary franchise to create something special. The show manages to bring out the absolute best in the Lupin franchise, as it delivers an experience that is satisfying for newcomers and die-hard fans alike. It’s a joy to watch, and a title that would be welcome in any anime lover’s library.