Made in Abyss: Journey’s Dawn 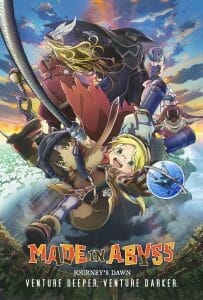 “You can relax child, I am cursed with a strong sense of duty.” Do not be fooled by the art or the animation style; Made in Abyss: Journey’s Dawn is an Eldritch Horror, wrapped up in cute aesthetic. As it is an adaptation of an anime that itself was adapted from a manga, various parts of the story had to be trimmed to fit the length and the medium. Journey’s Dawn moves along at a very brisk pace, which is a notable change from the anime that took its time to present the world over the first five episodes. The Abyss is a home of wonders, but as dangerous as a war zone, with each depth proving to be more perilous and terrible than the last. The further in that a person goes, the greater the toll it takes on them if they attempt to return. The local orphanage makes their money from artifacts scavenged from the Abyss, so the children are taught how to be cave raiders.

Our main character, Riko, is a clever and optimistic twelve year-old girl, though her size and personality make her appear younger than that. These traits get her into some trouble, first at the orphanage where she lives, and later in the titular Abyss. Her mom, Lyza was a famed explore, who didn’t make it back from her final trip into the depths of the planet’s seemingly endless maw.

Riko met Reg, a mysterious amnesiac boy, shortly after he saved her from danger in the Abyss.

Reg’s true nature is part of the mystery, so let me merely say that Riko considers him a robot. Perhaps because of his loyalty, she named him after a dog she was fond of. Shortly into Journey’s Dawn, Reg joins Riko at Belchero Orphanage, in the town of Orth, a bustling town that was built right on the edge of the Abyss.

It took me some time to adjust to the dangers that such young characters face here. The world we see is based around the Abyss, and our our view of the characters depends entirely on the color of their whistle. Beginners start with a red whistle, and can work their way up to a black whistle. The highest possible level is the coveted white whistle, but those are special and individualized. You have to earn them, much like RIko’s mother did before her disappearance. As I noted before, this is a remarkably cute horror story. Reg has no memory of his past, while Riko wants to find out what happened to her mother. Both are driven to explore the Abyss, regardless of the tremendous dangers they will face. Did I mention that she’s twelve?

Journey’s Dawn captures the essence of the TV series, albeit at a much faster pace. Since we haven’t gotten to the grimmer parts of the story, it’s not clear how Riko and Reg will handle some of the most unfortunate realities of the Abyss, or how the next film will present them. The sound quality was quite good, but the real draw is the visuals. As they were with the first episode of the anime, the quality is stunning. If the Abyss wasn’t so dangerous, it would be nice to just sit back and drink all of it in. As is, though, the atmosphere is enough to leave you on edge, wondering what’s going to happen next.

Riko’s cheerful optimism is what turns a fairly dark narrative into a beautiful one. Because this is only the first part, we don’t get to see the completion of the arc. As a stand alone, it’s an excellent introduction into either the anime, or the eventual part two. If a moviegoer decides to go the extra mile and read the manga, good for them, but let me suggest that the anime is excellent and Journey’s Dawn pairs quite well with season one. Four stars out of five.