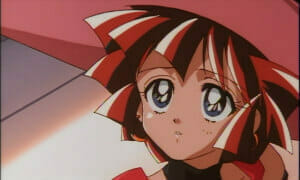 Sometimes, it’s nice to re-examine a series that I have covered before. Way back on my old blog, I covered both the Magic User’s Club OVA and TV Series. Of course, this was back in the days when Media Blasters was releasing the title on singles.  Anyway, when given the opportunity to cover both shows again after so many years, I seized it with utmost insistence and enthusiasm.

I have to say, Magic User’s Club is still a remarkable, if slightly overlooked anime series.

Magic User’s Club is, at once, a singular character-focused story and an ensemble cast piece. The focus typically rests on Sae Sawanoguchi, a young girl who comes to terms with her magical powers in the midst of a not-quite-malevolent alien occupation. The mysterious “Bell”, a massive interstellar spacecraft, has descended upon Earth bringing with it a legion of marionette doll minions. Though they don’t generally attack at will, any attempts to engage the Bell or the marionettes in combat have been met with swift vaporization.

At the same time, Sae is caught up in the typical high school drama, dealing with her fellow club members and their complicated relationships. Then there’s the mysterious being known only as “Jeff.” Quickly the layers start to build on this seemingly rote magical kid series, as it builds itself into something deeper, richer, and genuinely heartwarming.

As one can imagine, the ever-present threat of the Bell lends itself to a fairly dark atmosphere. Nobody knows what the Bell really is, and it’s capable of destroying life in an instant. Still, despite this, the series manages to maintain a genuinely charming and pleasant tone thanks to leading lady Sae.

Sae is just a precious, wholesome cinnamon roll, and it’s hard not to find yourself rooting for her throughout the series.  Sure, she is a bit of klutz and has trouble expressing herself. But damn it, she tries and doesn’t give up!  Sae was very much crafted in the mold of energetic go-getter magical girls, like Usagi from Sailor Moon or Hikaru from Magic Knight Rayearth. Her infectious, positive attitude can be seen in modern day magical girls like Yuki Yuna from Yuki Yuna Is A Hero . And, as expected, it’s that earnest nature that helps Sae to save the world (and her friends, by extension) by the show’s climactic finale.

Of course, things aren’t all about Sae in  Magic User’s Club. The show uses supporting characters to as great effect as it does with Sae, with major players gaining their own moments in the spotlight and doses of character development.  This ties in nicely with “friendship is power” message that radiates through the series. Granted the relationships between characters are hardly clear cut, as they run into miscommunication and other issues. In particular, I’d like to cite Aburatsubou, the vice president and “close” friend to nerdy club president Takakura. He is clearly gay and holds feelings for Takakura.  Sadly, though, he is unable to express his true feelings toward the gawky Takakura at all. The same could be said of Nanaka, Sae’s female childhood friend. She also hints at possible further feelings for her closest confidant, but knows it wouldn’t work out. This all comes to a head in episode 5, which focuses on these very awkward relationships within the club, while illustrating a good moral: Life is hard, sometimes, but we learn to get by with the help of friends.

Production wise, the series is nothing short of amazing, helped out by the remastering done with this release by Right Stuf Entertainment. Junichi Sato, known for his work on Sailor Moon and fan-favorite “healing” slice of life shows like Aria the Animation, directed Magic Users Club.   His deft hand at the helm shines through his amazing work with  an amazing job with the crew at Triangle Staff. The animation is clear, crisp and full of life and energy.  Michiru Oshima’s (of Little Witch Academia and Fullmetal Alchemist fame) soundtrack stands out as an exceptional, full orchestral score that I adored. I have to also give special note to opening theme song Senobi wo Shite Follow You, which is a great upbeat song that when springs to mind whenever I think of this series.

The English dub is quite fun, and well worth a listen. Michael Sinterniklaas directed the dub and wrote the scripts for the adaptation at NYAV Post. And, yes, this is the dub that was released in Media Blasters’ original single releases in 2001.  Veteran New York legends  like Jamie McGonnigal, Kevin T. Collins, and Lisa Ortiz can be found throughout the dub, and generally do a great job.  My personal highlight for the English track, though, has to go to Misty Daniels as Sae. Daniels helps to bring the character to life, to the point that I can’t imagine anyone else in the role. I have to say that, even if you’re one of those folks who thinks old dubs can’t be good, check this out. I expect that you’ll be pleasantly surprised.

I have to take a moment to praise Right Stuf’s release, which includes the blooper reels from the original Media Blasters DVDs. That said, though, I wish they had these were offered as an option on the DVD menu. As it is, you need to watch all through the episodes on each disc before you can access them.

It goes without saying that , Magic User’s Club is an overlooked and underrated magical girl series from the ‘90s that needs more love. It’s a delightful romp with a great story and charming characters. Thankfully, it wasn’t entirely passed by, as fans received a TV series three years later, in 1999.  I will be talking about that one next time, though. Til we meet again, dear readers.