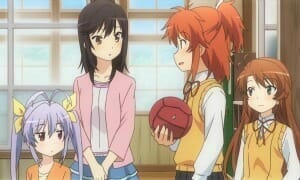 US Distributor: Sentai Filmworks
Production Studio: Silver Link
Was this provided by the publisher? No
More Info: Anime News Network 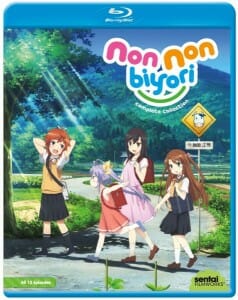 Warning: This review may contain spoilers. Reader discretion is advised

After a long day, nothing hits the spot like a relaxing iyashikei (“healing”) show. There’s little to no real conflict, which allows viewers to just sit back, and let the day’s troubles melt away. It’s within this subgenre that Silver Link’s Non Non Biyori reigns as a top-tier series. With a stellar presentation and absolute care given to every possible element, the series proves to be an irresistible treat.

The series revolves around Hotaru Ichijo, an average fifth grader from Tokyo. When fate sees Hotaru transferring from the big city to a tiny school in a quiet countryside village, it’s a bit of a culture shock. The school has a total of five students, herself included, three of which are girls: Renge in first grade, Natsumi in seventh grade, and Komari in eighth.

The nearest stores are miles away and at times, it feels as if the village is cut off from the rest of the world entirely. Still, though it takes twenty minutes by bicycle to get to the nearest comic shop and the closest video store is ten train stations away, there’s something about the laid-back lifestyle that makes Hotaru feel at ease. It’s a big change from life in urban life, but there are plenty of new adventures to look forward to as Hotaru learns that home really is where the heart is.

Any character-driven slice of life show worth its salt needs a strong cast to make it work. Thankfully Non Non Biyori delivers this in spades. The entire cast seems to exude an almost “organic” vibe through the series. None of the characters come off as half-baked, or lazy balls of clichés that were thrown together to tick off some design checklist. Rather, they feel like real people. For example, Renge, the youngest character on the show, acts like a normal seven-year-old. She’s curious and creative, and quick to make up songs on her recorder.

The cast’s lively, vibrant feeling is helped by truly stellar voice acting. Kana Asumi, who voices Komari, is sublime in her role. Her portrayal of a young teenager is perfect. Kotori Koiwai’s deadpan delivery of Renge might seem out-of-place for a child, it works, especially in the context of the series

Like most shows of its ilk, there isn’t much of a plot to drive the series. Non Non Biyori instead focuses on the lives of the leading ladies as the core of its narrative. Common scenarios like going to the beach and having a cultural festival are present, though thanks to strong writing, they’re given a unique, often offbeat flavor that’s refreshingly unique. For example, in episode five, the girls head to the beach. Things go a bit awry, though, when Komari goes missing because the beach workers mistake her for a lost child due to her short stature.

Silver Link did a fantastic job with the Non Non Biyori, crafting a series that’s simply gorgeous. Backgrounds are vibrant, with bright colors and a number of minute, delicate details that bring out the beauty of the countryside. Character designs are appealing, thought Hotaru’s physical appearance despite her only being ten years old, might stretch suspension of disbelief a bit. The show’s soundtrack is strong, composed of catchy melodies that complement the on-screen action.

There is very little that Non Non Biyori does wrong. It’s a modern classic, with excellent production values and superb writing wrapped in a relaxing, laid-back atmosphere. Whether you’re a long-time fan so slice-of-life shows, or just getting into the genre, it’s really hard to go wrong with Non Non Biyori. This is slice of life at its finest.