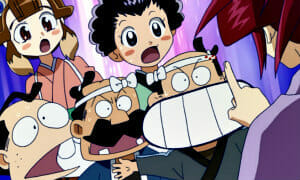 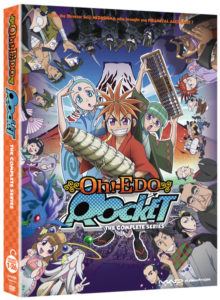 Seikichi is a teenage fireworks maker with a dream. He wants to create the greatest fireworks Japan has ever known, even if he has to do it in secret thanks to the Tenpo Reforms. His daily explosive exercises are put on hold, though, when a mysterious and literally starry-eyed girl named Sora shows up out of nowhere with a strange request. She asks Seikichi to build a firework so powerful, that it can fly all the way to the moon. Though the two couldn’t be any more different, both in their styles and their goals, the two set out to create Edo’s first space program.

Despite its fairly straightforward premise, Oh! Edo Rocket quickly loses focus. This is intentional, as the series attempts to charm viewers with its randomness and utter destruction of the fourth wall. Seriously, characters actually comment on how poorly written the show is. Sadly, these tongue-in-cheek moments make it difficult to actually care about the cast during more serious moments. It’s hard to take threats to the characters’ livelihood seriously when, just moments ago, everyone was cracking jokes about how comic relief characters can’t die and how any collateral damage can be fixed by the animators just redrawing buildings. 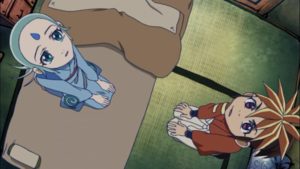 When the show tries to get serious with a murder mystery subplot, which results in several characters dying, it just comes off as another cheap joke. Similarly, it’s hard to muster the enthusiasm to care when characters bark out cliché lines like “Take me instead!”

Oh! Edo Rocket can be (very) loosely described as “historical fiction.” That said, the fact that the show is riddled with aliens and anachronisms would make it a hard sell to any self-respecting history buff. It would be better to call the series a mish-mash of influences, from kabuki to anime tropes, ballistics science, and many other things with bits of the Edo period mixed in for good measure.

On the other hand, Oh! Edo Rocket expects its audience to be at least somewhat familiar with its setting, specifically the laws that were in place at the time. The Tenpo Reforms, which banned many forms of entertainment, are a major plot device as to why making a giant firework is a risky ambition. 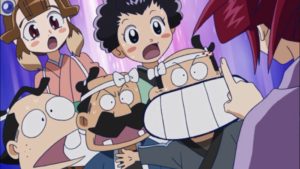 This one piece of historical faithfulness actually feels out of place when the series starts smooshing elements from the film Men in Black with fairy tales like The Tale of the Bamboo Cutter and Beauty and Beast. Somehow, though, even with all those other references, the show is an odd homage to the 1960s, with a soundtrack of swing and jazz accompanying a motif of analog televisions that have a tendency to randomly pop up and play flashbacks.

Part of the cast is drawn to look like characters from a ‘60s gag manga. As one would expect, Oh! Edo Rocket has a sense of humor to match its quirky characters. Unfortunately, the series fails to update its comedy for a modern audience, so nearly all the show’s jokes fall flat. The overall pacing  starts to suffer, as the gags get more and more repetitive and the comedic overreactions begin to overstay their welcome.

To make matters worse, Oh! Edo Rocket has a bad case of Dramedy Tonal Shift Disorder. The series flips between lighthearted gags and serious moments abruptly, ensuring that neither situation resonates properly with the viewer. 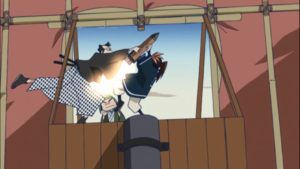 The English dub further exacerbates this problem, as it crams in jokes where there weren’t any originally. The addition of references to things like Looney Tunes and Star Wars, along with a suspiciously amped up sense of meta-humor in the dub had me flipping between language tracks to catch all the changes. Needless to say, it wasn’t Edo Rocket’s story that was holding my attention most the time.

Even though the show goes out of its way to create distinctive character designs, most of the cast is utterly forgettable. Oh! Edo Rocket’s story is little more than a series of subplots, which happen to end up overlapping. Instead of fleshing out the setting or deepening character relationships, though, these subplots mainly just result in characters being shocked at reveals that the audience was already clued in on a several episodes prior. Because of this, there’s little reason to really get attached to the cast unless a particular story or gag catches your fancy.

The Oh! Edo Rocket anime series is actually based on a stage play. It’s easier to envision the show as a mildly entertaining experience, if it were condensed into a few hours rather than dragged out across 26 episodes where deus ex machina ultimately saves the day, as the characters smugly look into the camera and then smirk as they point this out to the audience. Oh! Edo Rocket clearly thinks itself clever, but it’s really just random to the point that you expect randomness from it. Once the unexpected becomes expected, though, it just becomes boring.