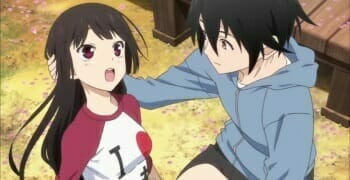 US Distributor: FUNimation
Production Studio: SILVER LINK
Was this provided by the publisher? No
More Info: Anime News Network 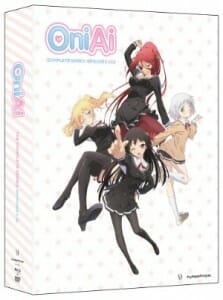 OniAi* is a show that doesn’t try to pull the wool over the viewer’s eyes in regards to its subject matter. It’s a straight-up harem show that’s unapologetic about the incest elements it presents. Akiko’s love for her Akito is far from the normal sisterly affection. Rather, Akiko flat-out wants to marry her brother and make sweet, sweet love to him. While the incest elements may turn potential viewers away, there is a much better reason to avoid OniAi. Frankly, the show just isn’t a good harem series.

OniAi’s most glaring problem rests in its cast, which is arguably the most important part of any show in the genre. Each of the female characters is a variation of common genre archetypes. Arashi is the sexually aggressive (and bisexual) student council president, Ginbei is the tomboyish childhood friend, and Anastasia is the rich foreigner that turns everything into a carnal affair. Later in the series, the harem gains two more members. The first is Arisa, the genius jailbait figure who also happens to be Akito’s fiancé. The second is Kaoruko, the editor at Akito’s side job. Kaoruko’s hook is that she believes Akito has a sister complex, which means that she should break him out his obsession. While all forms of entertainment use archetypes for their casts, the writing should at least attempt to make these characters interesting, or even likeable. If anything, they should at least develop from their base personalities over the course of the series. The writing for OniAi though, fails to deliver on even this.

Akito is in line with other male harem leads, in that he’s completely oblivious to the feelings of the girls in the harem, his sister excepted. With Akiko, Akito is steadfast in his refusal of every romantic and sexual advance she makes. Akiko’s constant obsession with incest, be it in her thoughts or her comments, grow stale very quickly. They quickly overstay their welcome, to become more annoying than enjoyable. 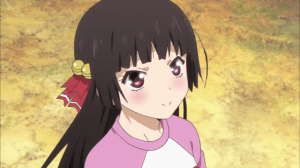 In regards to the harem itself, why do any of the girls have any interest in Akito? Akiko is never given a reason as to why she wants to ride her brother’s bone train, and no explanation is given in regards to why Arashi is interested in him, aside from the fact that Akito is a warm body with a pulse. In Ginbei’s case, it’s assumed that her feelings stem from her childhood friendship to the protagonist. Anastasia is the only girl who is given a real explanation about her interest in Akito, though it’s not given until the end of the show and even then it’s uninteresting. Arisa is the only girl with a legitimate reason for her feelings toward Akito, given that she’s his fiancée. Even this, though, isn’t crafted very well. The most interesting character, albeit the most underused one, is Kaoruko, who is easily the strongest female character in the series.

The personality of the girls are never developed more than their base archetypes and, while there is an attempt made at the end of the series to develop the girls, it is simply a case of “too little, too late” by that point.

The series bring up the common genre plotlines, such which include buying swimsuits, and trying to figure out which girl is better at taking care of Akito when he’s sick. There’s nothing wrong with falling back on these scenarios, but there should at least be a unique spin to set the show apart from the crowd and (hopefully) make it more appealing to casual viewers. 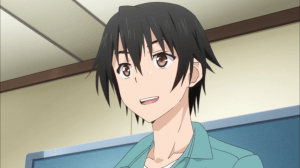 For all that the show does wrong with the story, one cannot argue that it slouches on the visuals. The production values are solid, with visually appealing background art, good animation, and distinct character designs. While Akito is the quintessential male harem lead, the girls do show some facial distinction, rather than the standard one or two faces with different hair and eye colors.

The actual fanservice is the standard fare: panty shots with a dash of nudity added for good measure, with the second half of episode four being particularly heavy on the nudity. Those who want more fanservice should check out the six omake shorts included in FUNimation’s release of the show. These are much more fanservice heavy, with the only downside being that they are barely animated. Also included in the set, which is FUNimation’s first and only subtitled-only release to date, is the clean opening and ending, as well as the American trailer for OniAi.

While having good technical merits is always a plus, they cannot make up for more glaring problems of uninteresting characters and stale jokes in a show. OniAi isn’t the worst harem show to hit the airwaves, but there are too many problems present that bring down the show from what most likely would have been an average harem show to a below average show.

*The full title of the show is Onii-chan Dakedo Ai Sae Areba Kaneki Nao yo ne, which translates as “As long as there’s love, it doesn’t matter if is my brother, right?