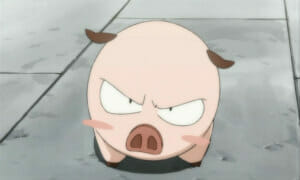 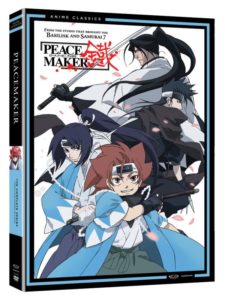 With countless historic battles as a source of natural drama to pull from, one would think the end of Japan’s Edo period would be difficult to make boring. One would expect that the bubbling conflict between reforming forces and the old guard would make for a compelling story about samurai, pride, and death. Unfortunately, Peacemaker exists to prove that you need much more than just an intriguing historical backdrop to make an entertaining anime.

Peacemaker takes place in the mid 1800s, during Japan’s “Bakumatsu” period. It was around this time that a powerful band of samurai known as the Shinsengumi carried out the orders of the Shogunate to exclude Japan from foreign trade and prevent the spread of western goods and ideas.?

Enter Tetsunosuke Ichimura, a short and spunky 15-year-old with fiery red hair to match his aggressive attitude. He demands to join the Shinsengumi in order to become a warrior and get revenge on the Choshu clansman who murdered his parents years ago. Tetsunosuke is reluctantly accepted into the group, but given the position of page to Vice Commander Hijikata Toshizo. It doesn’t take long before he’s deemed the new “puppy” of the group by the other members. 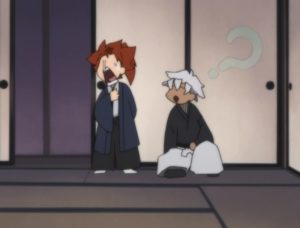 To be honest, it’s a fitting title for bratty Tetsunosuke, who performs his page’s duties with everything but style or grace. On the other hand, he’s also not much of a fighter, as demonstrated by his horrified reactions to spilt blood and the ease at which a samurai can kill.

Tetsunosuke’s motivations only grow murkier as time goes on, ultimately becoming a jumbled mess of contradictions. For example, Tetsunosuke’s father was murdered for spreading western culture, so Tetsunosuke logically joins a band of murderers against the spread of western ideals. Likewise, Tetsunosuke’s father often told his son to aim to become a “Peacemaker”. And yet, Tetsunosuke desperately wants to wield a sword, not to help bring peace to Japan but to settle a personal vendetta. 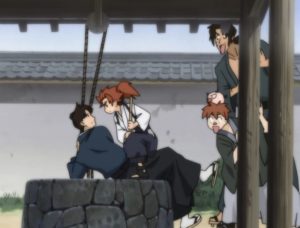 Still, while his tale is a strange one, at least Tetsunosuke has a backstory. Many characters are just left completely unexplained, with zero back story or motivations conveyed to the viewer. This can be partially blamed on the fact that Peacemaker is steeped in Japan’s actual history and so it assumes the audience is already familiar with the Shinsengumi’s role in that history. Because of this, though, Peacemaker ends up with a huge cast that’s difficult to get attached to, since so few are actually given any depth. The attempt to squeeze in countless historic cameos over actually exploring and building character dynamics takes precious time away from Tetsunosuke’s confusing inner conflict.

Seriously, this kid is a ball of cognitive dissonance.

He claims to want revenge and to become stronger, but a lot of episodes are spent on Tetsunosuke and his superiors simply goofing off. They visit brothels, throw a sports festival, and even play pranks in an attempt to create a jolly atmosphere. The absurdity of the situation is accentuated by the soundtrack’s use of Offenbach’s Infernal Galop, better known as “the cancan song”.?(I’m not sure if the usage of a western composer’s work is intended to be ironic or not.) These romps are too drawn out and pointless to be all that funny, and really don’t add anything to the story. Frankly, they’re a classic case of pointless filler. 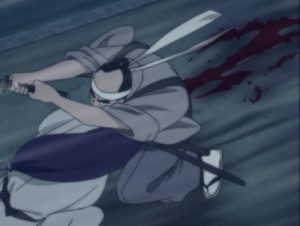 To make matters worse, these moments tend to be wildly inappropriate, as the Shinsengumi’s fun and games are awkwardly juxtaposed between bloody fights against samurai. Watching the Shinsengumi joking around and playing with a shoehorned mascot pig (or whatever else the writers could come up with) diminishes the impact of any drama in the series. So, when the time comes for things to get serious, the excessive amount of blood splattered everywhere actually comes across as more comical than the previous light-hearted scenes.

The gushing blood is apparently so important that it’s usually the main source of motion in action scenes, where stills and speed lines are heavily relied upon to communicate character movement. The actual number of people moving on-screen does pick up closer to the climax, but so does the number of speed lines. ?

The fight scenes are supposed to break up chunks of dry character dialogue, but the cheap animation tricks just make them feel disengaging, often pushing the visual language into the realms of sterile and bland. Whether it’s a training session or street fight, the formula remains the same: pose, pan, rinse, repeat until someone slumps over defeated. 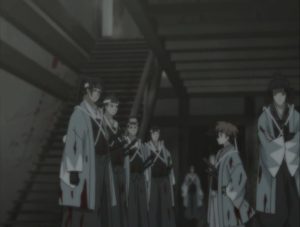 The overall series tends to strive for historical accuracy, and doesn’t take as many outrageous liberties with the subject matter. For instance, Tetsunosuke was a real person who really did serve as a page under Hijikata Toshi, and the show depicts the Shinsengumi in their actual baby blue uniforms as they patrol a traditional Kyoto, free of aliens or vampires. Zombies and their mysterious sorcerer commander, on the other hand, get their own subplot.

So the show obviously takes some creative liberties, but Peacemaker is not intended to be a history lesson. That said it’s not a well-crafted piece of fiction, either. For each piece of the story that can be found in a textbook, there’s another missing chunk that’s simply nowhere to be found. The fate of the sorcerer and many other characters remain mysteries as they simply vanish, never to be seen again. As the bloody raid at the end of the series approaches, all the suspense built up to that point is all for naught. Times and dates appear on-screen with the clear purpose of confirming that the audience should already know what happens. To make matters worse, what’s left to be explained is simply ignored, leaving the viewer unfulfilled if they didn’t already turn the show off out of boredom.

If you’re looking for a good introduction to the Shinsengumi, continue to look further than Peacemaker. This show has little more to offer other than poorly crafted character motivation, some historical shipping fodder and speed lines. Lots of speed lines.