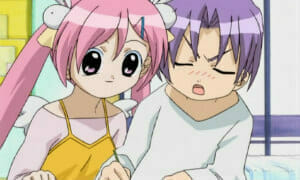 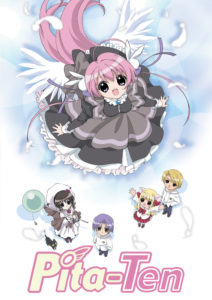 Kotarou is a boy whom you’d probably not pay a second look if you saw him in the streets. He’s quiet, reserved, and still in those innocent elementary school years. His world is also about to get shaken up, thanks to a peculiar new neighbor

One day, Misha, a hyper (and clumsy) angel in training who was sent from heaven to learn about humans and happiness, enters his life. She inexplicably starts sticking to Kotarou like glue after moving in next door, glomping him every morning on the way to school and injecting herself into his social circle. Though she’s totally incompetent as an angel, Misha has a knack for being friendly. Soon enough, Kotarou begins to enjoy how lively she’s made his daily life.

Pita-Ten’s approach to its characters is that of quantity over quality. Despite the premise and Kotarou’s occasional narration, Pita-Ten doesn’t really have a main character. It slowly amasses an ensemble of archetypes, then gives you a taste of their daily interactions. 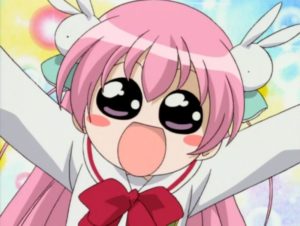 There’s Koboshi, the childhood best friend who’s easily jealous and also a catgirl. Hiroshi, the glasses-wearing know-it-all rich boy who’s socially inept. A psycho little sister, a shy demon girl, a talking cat, and so on and so forth.

As a result, the series ends up with a fairly large cast of recurring characters, each with different dynamics between them. Unfortunately, the characters never really grow up or change. They’re just vessels for the perpetual re-usage of whatever gag is assigned to them. Friendships, rivalries, and love triangles are established, but never really go anywhere. Misha’s clumsy, Koboshi’s jealous, Hiroshi’s obsessive, and Katorou is ready and waiting to let out a sigh when his friends start squabbling. 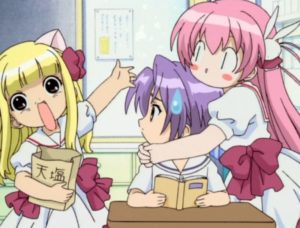 Pita-Ten is ultimately a comedy that depends on your tolerance for the repetition of jokes that may or may not have been funny the first time around. The charm of the characters ebbs and flows as the humor cycles from chuckle-worthy, to predictable, to tiresome, and then occasionally back to chuckle-worthy.

The show isn’t really about the characters themselves, though. It’s about the generic activities they partake in and the funny ways things just always seem to work out. Be it a school play, a beach trip, or a sports festival, anything resembling conflict will be resolved in two episodes or less. The point of it all isn’t for Misha to learn a lesson about humanity, but for each character to reuse their trademark comedic reaction in a slightly different context from the previous episode. In fact, it’s rarely relevant that Misha’s an angel in training until the end of the series, where her test to become a proper angel is just another activity to evoke reactions from everyone else. 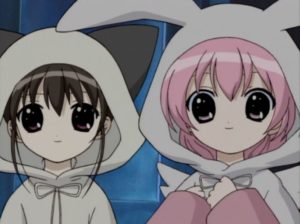 There’s nothing on the line for anyone in Pita-Ten and that’s both its biggest flaw and greatest charm.

The series is a lot like cotton candy: it’s cute, sweet, simple and mostly comprised of air.

This is not a show you watch for deep story or mind-blowing visuals. Rather, this is a series that you watch when you want to take it easy and enjoy the mundane pleasures of watching a show that you know won’t be throwing any twists at you. It’s frustrating if you’re expecting any proper world building or explanations for the fantasy elements of the series. Still, it’s hard to stay mad at this series when it’s obvious that Pita-Ten isn’t trying to do anything on that epic of a scale. After all, no one really eats cotton candy to satisfy a complex palate. Cotton candy is eaten for its homogenous texture and simple sweetness.

Pita-Ten is a good show for when you just want to relax, zone out, and enjoy the trivial troubles of angels that are too clumsy and demons that are too nice. You can resist Pita-Ten, pretend you don’t have time for anything without adult characters and complex storylines. Or you can appreciate it for what it is, and just let the generic cuteness wash over you.