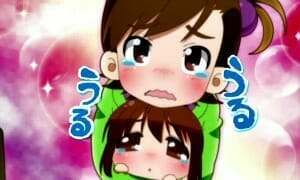 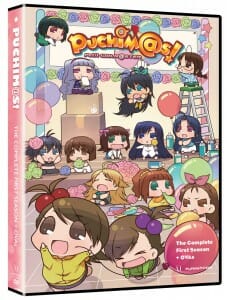 In a lot of ways, The [email protected] is an interesting property. Ask ten fans about what it is, and you’re sure to get just as many answers. Some will say it’s a video game. Others will say it’s an anime series. Maybe you’ll get an honest person who will say that it’s a low-guilt source of wank material. And, really, in all of these cases, they’d be right.

The [email protected] began its life as a game series that hit Japanese arcades in the mid-2000s. It was an offbeat blend of dating sim and Hatsune Miku-inspired performance segments, tied together by simple mini games. The characters were token archetypes, like “the cool girl” and “the girl next door.”

Basically, it’s like Love Live!, if Love Live! was awful.

Still, that didn’t stop the series from amassing a legion of rabid fans, who were likely the driving force behind XBox 360 sales in Japan for a few years. The Idolmaster has spawned no fewer than twelve sequels, three anime adaptations, and several spinoffs. At the franchise’s peak, Hatsune Miku herself made a guest appearance in the games.

While the fever has died down, the franchise remains a cash cow. A savvy content creator could likely defecate into a box, slap the [email protected] branding on it, and still sell enough copies to encourage a second go-round.

Which brings us to [email protected].

[email protected] is, quite literally, “in-joke, the show.” It’s a short-form comedy set in some form of the [email protected] universe. In this world, though, every single idol has a miniature doppelgänger, each with some “crazy” character quirk.

Some are based on unusual traits of the idols they represent. For example, “Yukipo”, is a miniature version of Yukiho Hagiwara. Her whole schtick is that Yukiho is a crybaby, who often says “I should go dig a hole and bury myself in it” when things go awry. This often leads to Yukiho proceeding to grab a shovel to start digging before people stop her. Yukipo, quite literally, just digs holes everywhere. 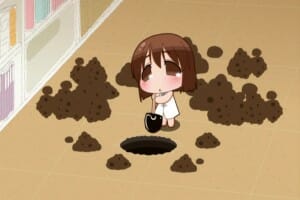 Others, like “Haruka-san,” are founded in obscure fan jokes. Haruka-san, for example, is basically Gizmo from Gremlins. She turns into a monster when fed after midnight, multiplies when wet, and all of the other fun stuff that are associated with Joe Dante and Chris Columbus’s iconic characters.

You know, minus the part where she’s supposed to actually be endearing.

Each two-minute episode gives just enough time for the idols to appear on-screen, set up a joke or two, and hopefully elicit a laugh or two from the viewer, and fade to black. This means that luxuries like character development and a running plot are the first things to go. Given that the very core of the show is the cast an its quirks, it’s clear that there may as well be a subtitle that reads “newcomers, look elsewhere.”

What we can all get a laugh about, though, is the the [email protected]’s musical score, or lack thereof. The background music is composed of forgettable, subdued melodies that are the furthest thing from memorable. The numerous popular songs from the franchise like Go My Way, Agent Yoru o Yuku, and The Idolmaster are nowhere to be found.

This lacking quality extends the the show’s visuals, which are, for lack of a better word, “cheap.” The character designs are inconsistent and messy, as if two designers were battling for supremacy over the show’s aesthetic. The animation wears the show’s budget on its sleeve, as choppy, two-frame motions are the norm, and corner-cutting measures can be seen in every cut.

Make no mistake: [email protected] is a series strictly for the super fans. The folks who geek out on the [email protected] Wiki, import every game, and read every companion book will find themselves in a wonderland of in-jokes and running gags. Those on the outside, though, will likely find themselves turned away and disinterested, wondering just who that silver-haired girl is and why she has an unhealthy affection for the miniature clones. The series makes no effort to welcome newcomers into the fold, and it’s damned proud of it. While [email protected] certainly will find an audience with the diehards, those who aren’t part of the devoted should look elsewhere for their comedy fix.