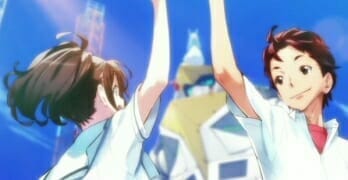 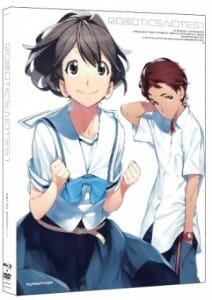 In a world where robots are commonplace and augmented reality apps are in the hands of every child, one man sets out to thin the rampaging herd that is humanity, using only the power of the sun and one boy’s innocence.  Who will save the human race!?  Who will revive eugenics as a “profession” and achieve worldwide infamy?  Never mind that, now. Let’s talk about how fun high school clubs are for a while.

This is no ordinary high school club, to be fair, unless you think constructing a giant robot is the most blasé of activities, right up there with Yearbook Editor and a double-reed ensemble, perhaps in concert with one another.  Power of the oboe, my friend.  The robot club is a Senomiya family tradition, founded by Misaki Senomiya, who summarily handed the baton to younger and suggestively less intelligent sister, Akiho.  You see, it has to be a giant robot, because giant robots symbolize justice, the power of dreams, and freedom from the opposite sex!  I get platonically aroused just thinking of it.

It seems at first that young Aki has to move heaven and Earth to get her club funded, get people to join, and finally get them to do anything at all to help her with the club’s Trigun-esque objective. Upon reflection, she manages to recruit the hugest of nerds: a gaming addict, a shut-in game developer, a closet robot enthusiast who brings his work to competitions like a young whippersnapper instead of learning his dad’s fishing business, and a girl who’s the proverbial anti talent, but somehow winds up being the robot’s data source for humanoid movement dynamics.  God help us all.

The show beats into our brains like a blunt instrument that Akiho’s unwavering determination is the source of all positive developments for the club, and at times, I felt genuine resonance with that ideal.  She lives under the shadow of her sister, who is described as more capable by every possible measure.  Today’s Misaki by contrast seems cold and distant and dare I say, mean.  Akiho isn’t angry or envious of her sister, at least on the surface, so her source of motivation is rather abstract in a sense.  It’s clear she has something to prove, both to herself and to sister Misa.  An eternal mystery about this show is how Aki’s leadership, if you call it that, produces results. We don’t see or manage to divine how.  Despite the antics and general entertainment value of a club atmosphere, I might have written off the show if it failed to offer more.  What it offers above camaraderie is intrigue. 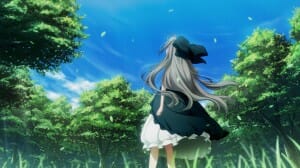 Yashio Kaito is what you or I would describe as a fighting game junkie.  He’s constantly playing the online game “Kill Ballad,” where players don mechanical gear and battle each other for prestige. His is a tablet computing society, one which is at a stage where augmented reality (AR) satisfies at very least the lonely hearts of teenage boys by painting cat features on their beloveds or whatever they might be in nerd lingo — “boobiage at least by anatomic terms,” as it were, thereby breeding disinterest in a breathing beloved without computerized cat ears to fondle — but I digress.

Kai, as Akiho calls him, stumbles upon an AR character at an abandoned building, and she presents him with a game of sorts: satisfy certain criteria, and receive a series of reports on what the late Kou Kimijima was up to before his murder — reports that paint a rather bleak picture about his compatriots prior to his apparent crisis of conscience and untimely death.  Some of the challenges test his commitment via the GPS and image sensors in his device, making it a rather compelling game, if I may say so.  The backdrop of Kimijima’s conspiracy is an Earth that is suffering violent solar radiation from a star that, one might argue, should still be stable. Why, oh why, are these solar storms happening? 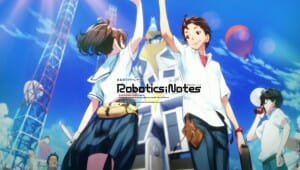 A corpus of conspiracy nut-job writings on the side is not cause for alarm in general, but people in Kai’s life outside his closest circle of friends appear awfully concerned about his extracurriculars.  As more reports bubble up within Kai’s view, terrible and too-coincidental things happen.  As the fiercely innocent robot club gains traction on its goals with but one setback, the backlash against Kai’s activities builds in turn, but the show does a tremendous job at convincing us that it all leads to the truth of, well, everything the characters care about or agonize over.

At this point in the story, I think viewers can take one of two directions: develop a genuine admiration of the protagonists and the bond they’ve forged and trials they’ve passed, or decide the camaraderie isn’t enough and focus on the events as a factual account, some of which are quite potent in the context of human suffering and/or triumph.  I like to think the show does rather well in either direction, but admittedly I’m with the camp that eats up the giant robot club ideals with a giant soup ladle.  I honestly loved every minute of it.

Robotics;Notes closes in standard fashion, as most stories go, with a big blow-out and some falling action.  Perhaps there’s a kiss or an “hasta la vista, baby,” but alas, I am not at liberty to say.  I terminate any thought of spoiling it for you.  Like many Japanese works, it’s like a lover’s Spring, retreating to the mountains before the sweltering heat of consequence sets in.