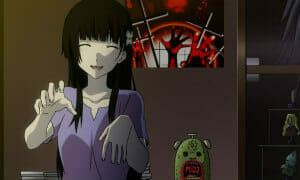 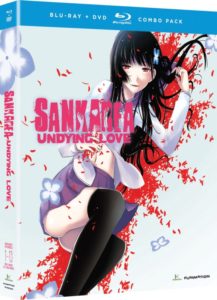 Are you into zombies? I mean, really into them? Do you fantasize about an undead girlfriend, icy cold and fresh from the grave? Well, you’re in luck! Sankarea: Undying Love seeks to sate that inner hunger with its slightly silly tale of a love that even death couldn’t extinguish.

The series revolves around Chihiro Furuya, a high school student with all the looks and personality of a forgettable nobody.  Apparently, the viewer is supposed to connect with Chihiro on some emotional level and see themselves in his place.  He’s the classic shut in, who has one thing on his mind at all times. Zombies. Chihiro’s walls are lined with zombie figures and his shelves are filled with zombie flicks. Then there’s his mind, which has visions of zombie girls slowly lurching through it. In short: He sexualizes female zombies and wants one of his very own

One day, Chihiro discovers an ancient formula that could make his undead fantasies come to life. Throwing ethics and logic to the wind, he proceeds to play god to zombify his dead cat Babbu. Popular friend and classmate  Rea Sanka becomes the second test subject soon afterwards. She steals and drinks the formula in an attempt to gain sweet final release from years of parental abuse. While it doesn’t work right away, a tragic accident sees Rea plummeting down a cliff, tearing her stomach open on a tree stump. This proved to be the deathblow that would see her rebirth as one of the denizens of the undead. 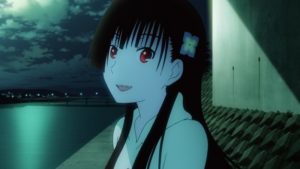 Rea Sanka is a fun, if not flawed character. She’s beautiful, popular at school, and has several close friends who look up to her.  She lives in a huge mansion, and she’s given anything that money can buy. Behind this luxurious lifestyle, though, lurks a dark secret. Her father, school principal Dan’ichiro Sanka, enjoys taking nude photos of Rea every time she has a birthday. To chart her growth, obviously. Clearly nothing deplorable here.

Dan’ichiro lurks in the shadows, watching everybody Rea speaks to.Those who get too close simply “disappear.” Rea’s troubled home life creates a need for escapism, leading her to become Chihiro’s assistant. Over time, as the two work on a way to bring Babbu back from the great beyond, Rea finds herself falling for Chihiro. After her resurrection, she lives with the Furuya’s while hiding from her family. 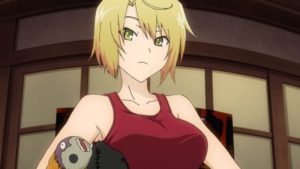 Since no rom-com anime is complete without a rival love interest, enter Ranko Saoji: Chihiro’s first cousin and childhood “friend.”  The two were brought together by their families at a young age, with hopes that Chihiro would learn to socialize with beings with an actual pulse.  At first, Ranko (or “Wanko,” as Chihiro calls her), hates her cousin, and thinks his zombie fixation is gross. But let’s not let common sense get in the way of a good story. Ranko starts falling for Chihiro after he saves her from a series of accidents.

Ranko is the main source of fan service in the show, especially during the yuri scene which occurs early into the season.  Still, she’s an interesting character because she’s actively trying to improve her cousin’s life, by trying to make Chihiro reintegrate with the world. She brings him to work at her family’s restaurant and tries to make him a productive member of society. Ranko’s “try hard” attitude makes for an entertaining and complex character. 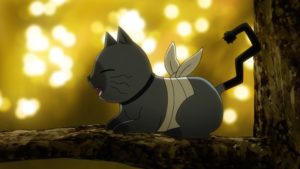 It would be unfair not mention a pair of supporting characters. The first is Chihiro’s grandfather, and author of the original zombie formula. He’s amusing simply because of his advanced senility. Chihiro’s grandfather will  ramble on about about some important plot point that could help everyone, only to snap right back into staring blankly at nothing while eating hydrangeas from the garden. The other is Babbu, the zombie cat. Babbu’s undead wanderings are adorable, as is the episode that focuses on the undead feline. He wasn’t given a choice to be a zombie, but still takes in stride.

I enjoyed Sankarea: Undying Love. It was a good show with interesting concepts. Watching Chihiro trying to deal with Rea’s zombie related issues, for example, were truly fascinating and among the best moments in the series. That said,  Sankarea ends before the plot can really take off.  New characters are introduced and major plot points start to reveal themselves in the last episode of the show. As always, the novel and manga fill in the gaps, but this will leave a lot of lingering questions for those who aren’t aware.  Still, if you’re really into zombies, ecchi, or ecchi zombies, why not  nibble on Sankarea?