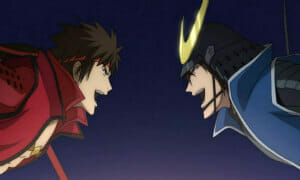 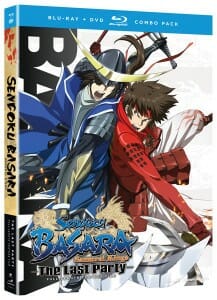 Swords clash and rivalries heat up in Sengoku Basara: The Last Party!

Sengoku Basara returns to deliver another action packed experience, packed with bright colors and manly bravado. I enjoyed my reunion with this great setting of aerial-flipping horses and long-lasting man crushes.

Sengoku Basara came into the world in 2005 as Capcom’s answer to the popular Dynasty Warriors franchise. Like Koei’s classic series, Sengoku Basara gives a gaggle of historical figures an over-the-top makeover, then lets them loose in a series of battlefields packed with baddies to slaughter. The series made its jump to the anime world in 2009, with Sengoku Basara: Samurai Kings. With the basics out of the way, let’s jump into Sengoku Basara: The Last Party!

Sengoku Basara: The Last Party is set after the events of Sengoku Basara: Samurai Kings. The film opens with a massive recap, which is intended to bring the viewer up to speed. With the sheer size of the cast, this proves to be a daunting task. Rather than inform, this segment proves to be a massive info-dump that will likely overload newcomers to the franchise from the get-go. Honestly, people are here for the action, not a ten-minute lecture that sets the stage for the film proper! 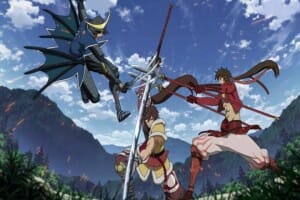 With the recap out of the way, the film starts to find its footing. The story tells the tale of Ishida Mitsunari, whose leader, Toyotomi Hideyoshi, was killed by Date Masamune. And, like any sensible person, Mitsunari is channeling his grief into a struggle to gain power so he may exact bloody vengeance upon Date.

Another disciple of Hideyoshi, Ieyasu Tokugawa, seeks a way to unite Japan through common bonds and sheer will. The nation is pulled into a crossfire, as ideologies clash and villainous forces begin to twist Hideyoshi’s will to darker purposes. The stakes continue to rise, to the point that forces from hell, itself begin to stake their claim on the world of the living!

Much like its predecessor, the film focuses mainly on Date Masamune and Sanada Yukimura. 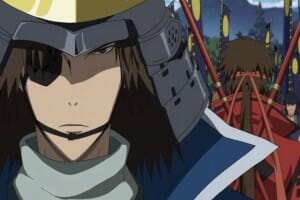 Exciting visuals still offer that visual punch for the characters, who continue to perform the over-the-top feats while showing off their overflowing manliness.There are a few lackluster moments through the film, with most of them able to be summed in two words: “hot pot.” That’s right, a giant hot pot earns a starring role near the end of the film, including giant vegetables. To make matters worse,the villains constantly shoehorn hot pot references into their dialogue, driving this scene even further into the ground.

The film builds up the final conflict between Hideyoshi and Ishida, only to make the rivalry pointless. Rather than finish with a climactic final battle between the two warriors, the film instead brings the main villain back to life just so he could get killed again. The entire course of events turns out to be little more than a setup created by the people really pulling the strings. 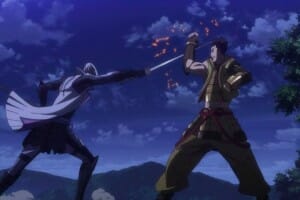 In short, the writing was weak. The movie’s ending lacked punch, becoming the generic “team up, for great justice” finale. I had to wonder if the writers actually trying, or if they were merely attempting to wring the last few drops of currency from a stale franchise.

Despite its numerous faults, Sengoku Basara: The Last Party manages to impress on a visual level. The entire experience feels like a video game, with impossible acrobatics, punctuated by witty banter. Also there’s a long dance sequence at the end of the feature, which is simply amazing to behold. It perfectly represents the sheer absurdity of Sengoku Basara as a franchise.

Even with its faults, Sengoku Basara: The Last Party is a fun experience. Those looking for a dose of over-the-top manliness should certainly give it a look.