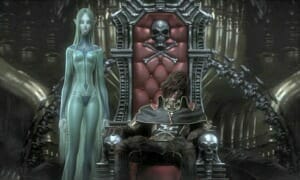 US Distributor: Ketchup Entertainment
Production Studio: Toei Animation
Was this provided by the publisher? No
More Info: Anime News Network

Space Pirate Captain Harlock is a pretty, but messy experience. Flat characters make following the film both a chore and a bore.

In the future, mankind has unlocked the keys to travel the cosmos. And, like seeds scattering from a dandelion, humanity left earth to colonize other planets. Unfortunately, a realization quickly sets in that the countless planets across the universe aren’t particularly suitable for sustaining human life. With humanity starting to fade and the limited resources of space starting to dwindle, roughly 500 billion people return to Earth in an attempt to reclaim their former home.

Humanity has outgrown the Earth, though, and the great Homecoming War inevitably breaks out as factions of humanity fight for a place on Earth. The war is long and bloody, marked by bloodshed and countless deaths. It’s not until an authoritarian federation, known as the Gaia Sanction, declares the Earth a sacred place. Through their decree, the Earth is a sacred land, unable to be claimed by mankind.

Harlock, a former member of the Gaia Sanction’s top troops, saw the group’s ideals erode, as “sacred land” became “a home for the diplomatic élite.” Disgusted and disillusioned, Harlock broke away from his former organization as he opened fire upon the very ships of his comrades. As a fugitive with no place to turn, he dons the mantle of the space pirate.

Over 100 years after Harlock’s break with the Gaia Sanction, a young man known only as Yama joins Harlock’s crew. The great pirate has come across a possible solution to his own ambitions. By destroying the Nodes of Time, it’s rumored that one would inevitably “restart” mankind from its genesis. It’s with this task that the Arcadia ventures forth, hoping to humanity by bringing about a brand new Genesis.

With an intriguing premise, how could this become such a bore-feast?

The flow of the film is also a bit off-kilter. It stays the course of the main story, but there’s a general awkward feel to how things progress. At least, the conclusion does. How the story gets there is a mess of unnaturally convenient timing. Things often seem to unfold in the cast’s favor without rhyme or reason, to the point that the film’s climax is a confusing mess. The movie simply leaves the audience wondering what exactly happened, asking how events even got to where they were in the last fifteen minutes.

One of Space Pirate Captain Harlock’s biggest issues is the characters themselves. Either there’s no personality to distinguish, or a character was written so poorly that his or her nature barely registers. Character motivations are clear, and their actions definitely match up, but it’s difficult to care when there’s nothing interesting about a character or the organization itself. The main character we follow is a generic-looking pretty boy, with a generic personality to match. Similarly, one of the cast members is almost a dead give-away for what will happen, especially as the movie progresses.

Harlock is definitely pretty to look at. The majority of the character designs are gorgeous, even if there are the proportions are a bit “off.” The design of Captain Harlock himself is cool, and definitely earns his place among cool-looking tough guys. However, the animation itself is mediocre. It becomes obvious that the designers put more time and effort into some characters than others. The film has beautiful moments, like when the Arcadia is moving in its smoke cloud. Other scenes, though, like when characters are walking down hallways, tend to feel lazy. Most of the time, movements don’t feel natural for the characters.

There’s not much to say about Space Pirate Captain Harlock, really. The visuals are attractive, with pretty neat character designs, but it’s boring to look at, thanks to the grayish tint the movie exudes. While the plot is interesting at first, it soon becomes too contrived to follow, and the one-dimensional characters certainly don’t help us make any sense or give the movie a lift. It’s a disappointment, for both old fans and any newcomer who wanted to see the famous Captain Harlock in action.