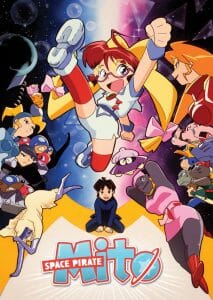 Alright, so this is probably the first time that I have come across an anime series where I am totally ambivalent about it. I’ll admit that, at times, tackling shows that are this obscure seems this way. But nevertheless, sometimes you have to play the hand you’re dealt. That is especially true in the case of Space Pirate Mito, an obscure late ‘90s science fiction/action-adventure series that got a new lease on life in 2014, courtesy of  Right Stuf.

Aoi Mitsukuni is a high school student who leads a rather normal life. His father passed away some time in the past and his mother, Mito, is busy with her modeling career. One day, though, Aoi discovers , that Mito is in fact an infamous space pirate who’s on the run from the Galactic Police. She’s even attracted the ire of the organization’s top enforcer, Ranban.

As if her criminal double-life wasn’t enough of a shock, , it turns out that Mito uses a robotic suit for combat. Without the suit, she appears barely old enough to be Aoi’s little sister, which prompts an initial shock denial on Aoi’s part. With his normal life torn asunder, Aoi finds himself tossed into a fun space adventure while working through a suddenly-complicated relationship with his outlaw mother. 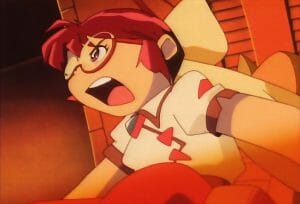 Before I go on, I’d like to note that Space Pirate Mito aired back in 1999, as a split-cour show. The first half aired in Winter ‘99, while the second half ran in the Fall.  In fact, the show is likely one of the first examples of an anime series using the split-cour format. With this in mind, I will approach both seasons as somewhat separate entities, even though they are linked by the show’s two main characters. Moreover, the first part has an English dub, while the second doesn’t, so making that distinction is apt.

Anyway, Space Pirate Mito’s first half  focuses on Aoi as he comes to terms with who his mother, Mito, actually is and discovers his greater  role to play in the universe. The overall plot is pretty compelling, especially when it starts to dive into the story of how Mito met Aoi’s father. I have to admit, that episode was a highlight for me.  That said, the series has some serious tone issues. Some moments feel out of place, as it tries to draw laughs out of the audience when they’re not really warranted. The first example that comes to mind to me are the two Nenga siblings, Mutsuki and Masatsuki. At first they are presented as Ranban’s lackeys, with the tactical prowess of Team Rocket and rely a bit too much on gag humor. Mutsuki has an allergic reaction to water and will sprout mushrooms when stressed, often treated like a joke. Masatsuki is a justice-obsessed brat who likes morphing random objects into giant robots. Moreover, these segments feel jarring when they bookend more heady material, like Ranban’s backstory (which tackles fluid gender identity issues). 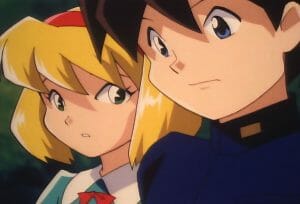 The show’s delivery issues are exacerbated by the English dub. Sean Schemmel (you might know him as Goku from Dragon Ball Z) directed and wrote the adaptation at NYAV Post.  Between you and me, though, this dub shows that he should have stuck to voice acting. Aside from Lisa Ortiz, who puts in a great performance as Mito, everyone else seems to be interested in creating an “edgy” gag dub. Suddenly, Masatsuki gains a comical Russian (?) accent or having one minor character is delivering his lines in with a baffling Christopher Walken impression.

I had to pause that episode while watching, rewind my DVD (lol) and go back to rewatch, just to be sure of what I just saw and heard. Why that was put in is beyond me. It doesn’t make me laugh as that seems to be the intention of doing the impression (because lol Christopher Walken has a funny voice), especially since the written material delivered is a somewhat serious backstory information for that particular minor character. 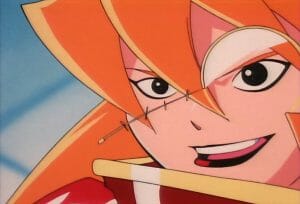 Thankfully, that issue doesn’t have the opportunity to arise with the with the second cour. The season shipped to stores five years after its predecessor. Due to Media Blasters running out of cash in the piggy bank, it was released  as a bare-bones, set. The original Japanese is decent, certainly more enjoyable than its English counterpart.

The second part’s plot also improves on the uneven tone issues from its predecessors, as it sticks mainly to serious adventure and drama fare. The episodes delve into a few interesting ideas on the nature of the universe and reincarnation, with regards to Aoi and the second half’s main antagonist the reawakened goddess Hikari as it is revealed that Aoi is linked to her in quite a surprising way. I also like how these episodes developed the relationship dynamic between Aoi and Mutsuki, which sees the two go from being bitter enemies into friends, and perhaps even more if we go by what happens in the second half. The second hal gives us more screentime for some of the supporting cast, like with Masatsuki and Kafuko, which expanded those characters beyond their initial one-dimensional/gag humor basis. The ending is pleasant and ties up the loose ends, but as the credits rolled, I couldn’t help but feel that the entire experience would’ve been better if the first half was more balanced.

I will note that both cours have those fun, upbeat ‘90s-style earworm opening songs. And, in true ‘90s fashion, they serve as a good contrast with the soft, slow ending themes. I’d also like to add that Space Pirate Mito sports a few CGI sequences, which are mostly used for the spaceships and outer space scenes. As you might expect, they haven’t aged all that well. They feel as if they were sliced from cut-scenes from a late 90s video game.

Overall, Space Pirate Mito is fun, but could have been better. If you can look past the slightly cringy dub, the aged CGI sequences, and the uneven tone, it’s a fairly entertaining ride. I admit that I had a good time watching it, and if you are looking something off the beaten path, you can’t go wrong with this title.