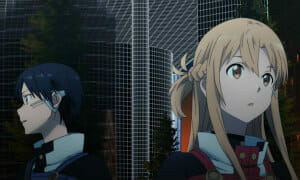 US Distributor: Aniplex of America
Production Studio: A-1 Pictures
Was this provided by the publisher? No
More Info: Anime Planet

Sword Art Online. Those three words combined form a title that can send an anime fan into a tizzy of excitement, or make a chill of disgust crawl up their spine. Regardless of how you feel about the franchise, though, it’s impossible to deny that Sword Art Online has become a worldwide phenomenon and now, after years of waiting, the newest chapter has been released into the wild in the form of a film called Sword Art Online the Movie -Ordinal Scale- .

In this two hour movie, a new gaming craze has hit Japan. Specifically, folks are fawning over an augmented reality system allows players to interact with a virtual world without going into a full dive state. The concept is so popular, in fact, that the games that were once hugely popular in the past are seeing major declines in player counts. Titles like Gun Gale Online and Alfheim Online have seen their populations drop so low that special events are being delayed or even canceled all together. 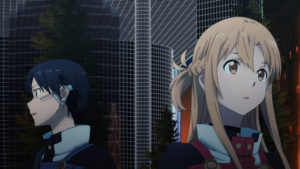 In the center of this new craze is a game titled Ordinal Scale. Our hero Kirito, however, isn’t as into the title as his harem… err, friends. He still prefers the full dive system, even in light of the augmented reality hype. It doesn’t take long until it becomes apparent that Kirito’s apprehensions aren’t as unfounded as others believe.

Over the course of the film, players who survived the horrors of Sword Art Online, (including his girlfriend Asuna) find themselves losing their memories after being defeated in boss battles. What is the deal behind Ordinal Scale, and will Kirito be able to restore everyone’s memories before it’s too late? 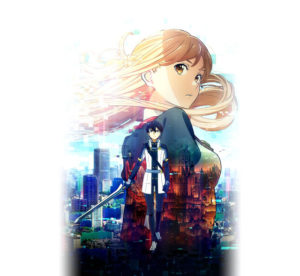 Sword Art Online still has its fair share of detractors to this day, many of whom perceive the series to be deeply flawed thanks in part to an overpowered protagonist who is seemingly able to conquer any challenge without breaking a sweat. Apparently, original creator and scenario writer Reki Kawahara heard these complaints. Rather than take the easy route, Kawahara  did everything in his power to craft a plot that would appeal to long time fans, as well as those who were always ready to list their reasons as to why Sword Art Online is over-hyped.

The introduction of the new gaming system within Sword Art Online the Movie –Ordinal Scale- provides an effective, organic means of bringing  Kirito down a few pegs. The first two seasons of the Sword Art Online anime saw Kirito entering worlds, where all actions were handled by a virtual avatar. Kirito was able to overpower his enemies through careful allocation of his skill points, which made him a force to be reckoned regardless of which  game he was playing. In a system where he isn’t controlling a digital stand-in, Kirito is forced to rely on his actual abilities. This provides fodder for a number of hilarious moments, including one where he literally trips and falls while charging into a boss battle.

And really, that’s one of the best parts of Ordinal Scale. Despite being primarily an action movie, it’s not afraid to make you laugh with the cast. From a random public karaoke scene, to Kirito having to power himself up in order to take on the primary villain, this is a movie that will have fans (and dare I say, even non-fans) smiling throughout most of the run.

Even if you’re so stone-hearted that you can’t muster the energy to crack a smirk, let alone a smile, it’s hard to not be impressed by A-1 Pictures’ absolutely amazing animation. From start to finish, it’s obvious that the studio put forth their absolute best efforts to create a stunning visual profile. The characters are well designed, and the battles are fluid. Seriously, it will have your heart pounding with excitement.

If there are any flaws to be found within Sword Art Online the Movie -Ordinal Scale-, it would be in the run time. Clocking in at about two hours long, the film starts to drag as it enters its third quarter, to the point that fans will likely be wondering when the climatic final battle will take place. While the last scenes of the movie provide a fantastic payoff for fans who stick it out, I can’t help but feel that the creators could have removed about thirty minutes of footage without anybody noticing.

Overall, though, Sword Art Online the Movie –Ordinal Scale- is a fantastic addition to Reki Kawahara’s ever-expanding  universe. While it’s not perfect, this is a film that rewards long-time fans, while also providing a fantastic starting point for those who managed to resist the series’ siren call up to this point. Anime fans and non-fans alike owe it to themselves to check this movie out if they are looking for some fantastic action and laughs with these characters who have become so near and dear to anime lovers’ hearts