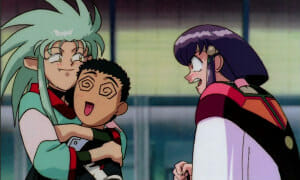 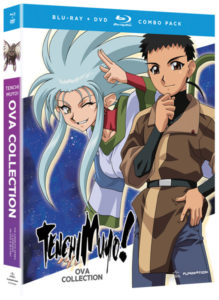 Ah, Tenchi Muyo!, it has been a while. Before I begin, I’d like to offer full disclosure: This review covers the first two OVA series. This doesn’t include 2003’s Tenchi Muyo! Ryo-Ohki. I actually first caught this franchise back in the day, when Tenchi Universe and Tenchi in Tokyo were airing on Toonami.

Tenchi Muyo tells the tale of Tenchi Masaki, a young Japanese man who lives his ordinary — if not mundane life with his father and grandfather at the family shrine. One day, Tenchi ventures out to a cave, which he had previously been forbidden from venturing to. It turns out that the warnings he received were well-warranted, as Tenchi accidentally stumbles upon, awakens, and invites the wrath of an ancient demon.

Some days later, after school, said demon returns. Well, kind of. The demon is actually Ryoko, a bodacious space criminal who was imprisoned on Earth over 700 years ago. But that’s not all, as alien princess Ayeka arrives to capture Ryoko, only to be thwarted in that endeavor and stranded on Earth. Add in a wacky mad scientist, Ayeka’s adorable sister Sasami, and a ditzy blonde officer of the Galaxy Police who somehow end up living with him, and you have a recipe for certain disaster. 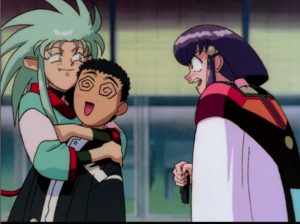 Tenchi Muyo!, next to perhaps Love Hina, is the definitive classic of the harem genre. Titles today owe a huge debt to the series, which helped to set the guidelines and tropes that still commonly appear.  The milquetoast male lead, the many female archetypes, even the way shows approach the nature of various relationships can thank Tenchi Muyo! for leading the way. Of course, while some of those elements are a bit worn down by today’s standards, they were  still refreshingly different back in the ‘90s.

Tenchi Muyo!’s characters are the definite highlight of the experience, especially when one limits his gaze to the OVAs.  The series is able to elevate its cast, giving to the archetypes and making the viewer genuinely care about what happens to them. Tenchi is certainly the patient zero when for harem male leads, being one of the first to stand out as a mundane character thrown into extraordinary circumstances. Meanwhile, each girl has her own quirks and personality flaws, from Ayeka’s pompousness, to Ryoko’s temper, and Mihoshi’s, well… “blonde”. The result is a well-rounded, lively cast who stand more as people than 2D cutouts. 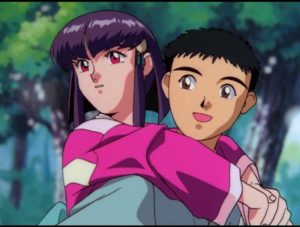 The story, on the other hand, is another matter. The two OVA series are alright, in the sense that they establish the cast and relationships well enough. The series then gets trapped in a cycle of one-offs, until an actual villain is introduced (and soundly defeated shortly afterward).  That said, the story content tends to veer between the extremes of rote and just-plain bizarre. For example, episode 9,focuses on Sasami, and, while there is a bit of rather interesting character development, nothing really comes of the experience. Episode 10, which features Ryo Oh-ki turning into a little girl, is a just-plain outlandish story which leaves me scratching my head in puzzlement. But aside from that, the rest of the episode strike a fine line between wacky slice of life comedy  and science fantasy adventures.

It also doesn’t help fans who were exposed to the Tenchi universe through other shows will notice considerable differences between those and the OVAs. Certain characters are excluded, backstories are changed, and more drastic alterations are made to cast members that may be beloved by fans in another form. In that regard, the OVAs feel more like a first draft, which sees its lack of narrative focus refined and fixed in the TV shows and movies. As much as we can give credit to Masaki Kajishima for creating this show, the series has been served much better from the input of other individuals like Hiroshi Negishi and Koji Yoshikawa. 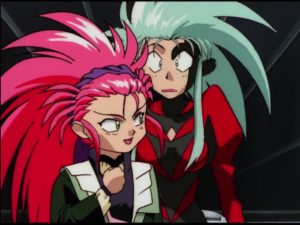 Even today, the English dub is well-regarded, even if it hasn’t exactly aged all that well. That said, I can’t imagine any other English dub cast for this series, probably due to having watched the tv series on Toonami back in the day. Matt Miller does a serviceable job as Tenchi, though he can overdo it at times. The rest of the cast tends to be serviceable at best, though the actresses for Ryoko and Ayeka really  stand out. Jennifer Darling may come across as slightly miscast as Ayeka, but after a while, it’s hard to imagine anybody else as the Juraian princess, with her somewhat snobbish tone. Petrea Burchard, on the other hand, nails it as Ryoko. It’s a bummer that she’s only known for this series, as she is just superb.

The Tenchi Muyo! OVAs are a fantastic introduction to the greater franchise, especially if you haven’t been exposed to the crazy world of Tenchi Jurai before. It’s a great glimpse into the world and personalities of characters that have been a mainstay in the fan culture for an entire generation . While it certainly lacks the narrative finesse of the TV shows, it’s still a fun and entertaining time. Remember, though: before you complain about the quality of dubs today, you really should check out Tenchi, and realize just how far we’ve come since the ’90s.