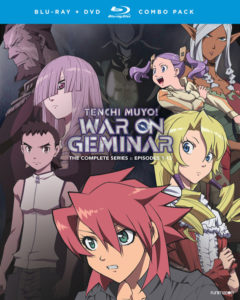 My look at the Tenchi Muyo franchise concludes with what has to be the absolute worst entry: Tenchi Muyo! War on Geminar. Yes, it’s even worse than Tenchi the Movie 2: The Daughter of Darkness. For all of the flaws of that “movie”, it is at least short, quick and relatively painless. War on Geminar, quite frankly, isn’t.

The series is a remarkable failure, on a level that I haven’t seen since Agent Aika and Amazing Nurse Nanako. I’ll be referring to the show as strictly “War on Geminar” going forward, for reasons I will explain in a bit. But, to brutally honest, we’re talking about a show that fails on nearly every count when it comes to story, characters, animation production, and even the English dub.

War on Geminar’s plot showed some initial promise. It concerns a planet in a distant galaxy, where a Princess named Lashara is taking part in a coronation ceremony. Sadly, it’s not meant to be as  some shadowy organization wants to kidnap and/or assassinate her for some nefarious reason or another. Since no major underworld organization has hitmen or anything like that, they hire Kenshi Masaaki, a mysterious young man from another world, to take down the target. Things go awry, though, and Kenshi finds himself  captured by Lashara. 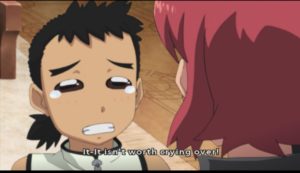 Worse, the hapless assassin is forced to become her servant. Kenshi yearns to return back to his home, which apparently is in another dimension.  Eventually, Lashara decides to go to some mysterious place known only as “the Holy Land.” At this point, any viewer whose brain cells haven’t rotted away will probably be asking if,maybe, War on Geminar could start to give a damn and find some way to send Kenshi home, or at the very least have some exciting sci-fi action set pieces.

Neither of these potentially awesome things happen.

Instead, it turns out that the “Holy Land” is a fortress and a training ground for potential mecha pilots. Or, in layman’s terms, a school. And with this, the series morphs into a slice-of-life school comedy with harem elements it worked for Tenchi Muyo, it has to work here, right? 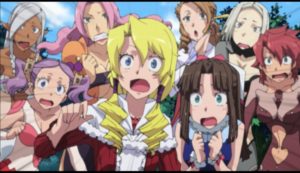 The entire premise isis just so clichéd and tired. To make matters worse, each of the show’s thirteen episodes is 45 minutes long at minimum.   One begins to liken each episode as a miniature slice of eternity, cruelly meted out by the ticking run time.

Then there’s the padding, as the studio scrambled to justify its 45-minute run time in each episode. Frankly, the show just bottoms out at episode 7, and everything past this point was as pointless as it was awful. I would have switched it off after that, but had to continue.

The second half of War on Geminar is no better, though it’s the point where the actual War on Geminar breaks out. It is rather telling when the villains take eight episodes to enact a plan that’s mentioned way back in the pilot. It becomes a stunning testament to amazing pacing (not really). 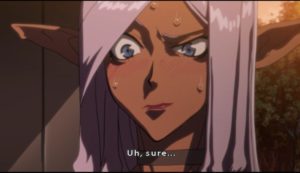 This half features a few revelations that are shocking, albeit momentarily as they carry no weight or gravity. By this point, I had moved to stage 3 of grief, from tedium to frustration. By the end, I was wishing for it to just end already. Of course, even that is spoiled, as  yeah the show ends on a nonsensical cliffhanger and obvious flimsy sequel hook. The jokes on them, though, as it’s been over six years since War on Geminar’s final DVD shipped to retailers.

The limp finale ensures that nothing really comes to fruition by the series’ end, aside from the fact that the villains are defeated. Still, even that was more by their own incompetence then the heroes being a stronger force. Does Kenshi find a way to get back home? Nope, as that was dropped pretty soon into the show’s run. Does this the harem situation get any sort of resolution? Nope, we don’t even get the courtesy of a “First Girl Wins” situation.

Now, before we get any further, I’d like to point out a fun little fact. War on Geminar was originally titled Sage Machine Master Story  in a Different World (Isekai no Seikishi Monogatari) in Japan. The series was renamed Tenchi Muyo: War on Geminar outside of Japan, despite the fact that this show has little to nothing in common with the main Tenchi Muyo! continuity. This just goes to show how painfully generic the show is, though the original title is a bit more apt as to what actually happens. 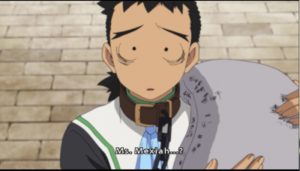 Characters don’t fare much better in War on Geminar. Kajishima Masaki (chief director and original creator) doesn’t seem to have changed his style much from when he started the Tenchi franchise in 1994. Let’s take Kenshi as an example. Kenshi is “Tenchi 2.0”, albeit with even more crazy powers and the magic of the self-insertion.  He just takes it to whole new level, as Kenshi is practically perfect in every way, meaning that every female character falls fall for him. But he’s still a bit of a wimp, though! He has to be wimpy! This has countless negative effects on the show’s delivery, as he is so perfect that there is no tension or suspense. Every single attempt just falls flat.

The female cast members, despite their attractive designs (Aura the dark elf princess comes to mind), are just drowning in clichés and tropes. They seem interesting at first, but they prove to be about as shallow as a puddle on a hot summer day once Kenshi enters the picture.  At this point, the actual human elements fall away as they start brainlessly fawning over him and engaging in petty squabbles. 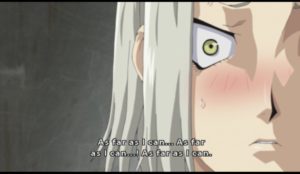 Princess Lashara is like Ayeka, albeit without the charm or likability. Then there’s Mexiah, Chiaia’s older sister, and Queen Flora, both of whom, are older “seductress” characters who go out of their way to try to tempt Kenshi. It’s  incredibly revolting, and makes me wonder if this is one of Kajishima’s many kinks or not.

Then there’s the fanservice. War on Geminar has a thing about rather bizarre attempts to titillate the viewer,  many of which make the the main Tenchi Muyo! series look tame by comparison. Problem is, though, that  War on Geminar tries to be funny and arousing at the same time, only to fail on both counts. Frankly, both the humor and fanservice turn out more groan-worthy then not.

Surely, since this is an OVA, the animation should at least be decent, right?  Not quite. To be honest, the animation is barely passable, and feels rather out of date even considering the show’s over six years old. It wouldn’t surprise me if word got out that War on Geminar was made back at the turn of the millennium, and Kajishima-san kept in an archive for a decade before introducing it to the world. There isn’t much to complain about, mainly because things are so generic. The mecha fight sequences are a highlight, but the rest is merely serviceable. The fanservice is flashy enough, but again, it’s pointless. 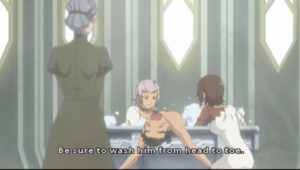 Surely, the English dub must be a saving grace, considering it’s from Funimation! Okay, I appreciate the effort in getting so much talent for this project. Still, the big names were for naught, as War on Geminar just doesn’t work. In fact, the English dub doesn’t seem to fix any of the problems. Heck, in some cases (particularly with the fanservice and innuendo) they seem to double down on that material. For all the competent casting and vocal performances present in this dub, everything just feels too rote. At points, the cast tries to bring something more, but it’s not enough to keep this train from going off the tracks.

War on Geminar is, quite literally, a tale told by an old fool, full of sound and fury, meaning nothing at all important. This show is so fundamentally broken that a complete overhaul would be required for it to actually work.just tear the building down to the ground and start from scratch. Leave War on Geminar in the dustbin where it belongs, and hope that it never comes back. (I’m looking at you, Tenchi Muyo OVA 4). The only positive I drew from War on Geminar was a newfound appreciation for the anime series that I love.