Tiger & Bunny – The Movie: The Rising 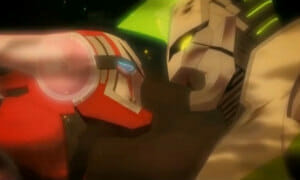 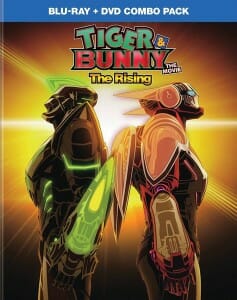 Now this is more like it! After dissecting Chaos;Head, which I found to be an interesting failure, I was assigned something a bit more substantive and a lot more fun.

Tiger and Bunny is a sci-fi superhero story set some time in the future. In this world, special people are gifted with superpowers. These folks, known as NEXT (Noted Entities with Extraordinary Talents) take part in HERO TV, which televises heroic feats like catching criminals and keeping the peace among the citizens. If I had to make a parallel, I’d say it’s akin to Marvel and DC comic book heroes, with a bit of commercial sponsorship for good measure.

The series revolves around Kotetsu T. Kaburagi, better known as “Wild Tiger.” Kaburagi is a veteran NEXT, whose waning career is forever changed when he’s forced to take on a partner. Barnaby “Bunny” Brooks is everything he’s not, but the two must find a way to work as a team while living their own lives off the clock. Tiger & Bunny – The Movie: The Rising is the second and final film in the franchise, that offers one last adventure for the dynamic duo. 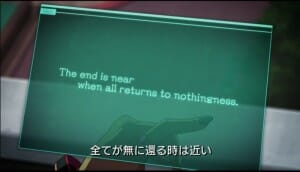 The film opens with a fantastic, rocking song accompanied by some nice impressive visuals that really got my attention immediately. Kotetsu and Barnaby are getting a bit testy with each other. Barnaby wants to advance to First League, while Kotetsu feels the need to tell his partner to take it easy and do the hero business for the right reason. Rather than seek fame and fortune, Kotetsu feels that heroes should be doing good for others.

Unfortunately, the duo’s sponsor is bought out by an ambitious businessman named Mark Schneider, who proceeds to make drastic changes. He disbands the Second League, leaving Kotetsu without a job. Barnaby, on the other hand, being the new talent, gets a new partner. His new companion, Golden Ryan is good at his job. Unfortunately, he’s also a total egotist, who’s in the hero business for the fame and fortune. Amid the changes, a  new threat looms in form of a trio of malevolent NEXTs. They’re tied to some vague Goddess Legend, which forces Tiger and Bunny to join forces for one last time as they face off against a seemingly unknown evil. 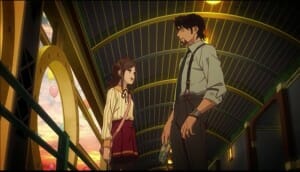 Tiger & Bunny – The Movie: The Rising works due to its nice balance between action and character development. The major subplot, which sees Kotetsu bonding with his daughter, is quite nice. On the flip side, though, there is a questionable side story that sees Fire Emblem dealing with some inner turmoil, which would be more impactful if I cared enough about the character. The subplot resolved rather abruptly, making it feel a bit out of place with everything else in the movie. Granted I don’t mind Fire Emblem and the content of his subplot, just the placement of it within this movie. The general theme of the film revolves around the meaning of what it means to be a hero, and what should motivate a person to pursue such a lofty goal. It uses this thread to explore and re-evaluate Kotetsu, Barnaby, and even Golden Ryan to a point.

Of course, the plot is a bit on the expected side. I mean, when I was watching, I could just about predict what was bound to occur. Still, the movie has so much fun and energy that I didn’t mind it so much, especially when the actual villain comes in to delivers some expected talk about ‘victims of greed’ and some vague ‘revenge’, which I suppose is fair for this type of action-oriented shounen flick. 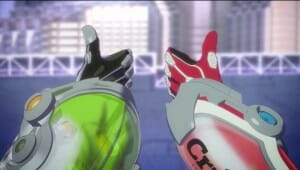 One of the things that irks me about the movie, though, is that it just throws the viewer into things from the get-go. A bunch of characters show up with little in the way of introduction. Then again, this is the second movie associated with the Tiger and Bunny series, so the makers likely figured that their audience is composed of people who have seen the series and first film already.

All things considered, Sunrise offers a nice-looking production. The action is well-choreographed and beautifully executed. Granted, the CG work could have been integrated a bit better. The soundtrack by Yoshihiro Ike is awesome and well worth a listen. It did get me pumped while the action beats took place and kept me in a fun mood while watching the movie.

The English dub is a fantastic effort by Studiopolis, which saw Suzanne Goldish in the director’s chair and Steve Kramer serving as scriptwriter. Wally Wingert and Yuri Lowenthal as Kotetsu and Barnaby, respectively, do a great job with their roles. Wally plays the veteran with a superb mix of confidence and world-weariness while Yuri plays the hot blooded, strong-headed Barnaby to a tee. At this point, I can’t imagine anyone else voicing Barnaby. The rest of cast reads like a who’s who of well known and respected LA voice talent. The list is a parade of fan favorites like Crispin Freeman, Kari Wahlgren, Laura Bailey, and Liam O’Brien, among others. There is not a single flat performance to be found anywhere in the dub, which is something of a rarity.

So, yeah, Tiger & Bunny – The Movie: The Rising  is a lot of fun and well worth checking out, especially if you are a fan of the Tiger and Bunny series. If it’s any indicator of quality, the film even got me interested in checking out the TV series. I enjoyed it immensely, as it presents a near complete package of a good time, even with some nagging issues. This gets 2 thumbs straight up from me!