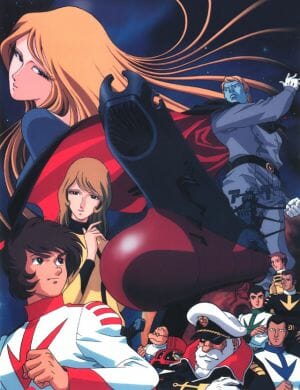 Earlier today, it was reported that Syfy would begin airing Star Blazers. Two episodes of the show are scheduled to air on April 21, in the 12:00AM – 1:00AM time slot. I have to admit that this is an interesting move by the company. Of course, I use the term “interesting” in a couple of ways.
The network is no stranger to Leiji Matsumoto‘s work. When they began airing anime in the early ’90s, Sci-Fi ran Matsumoto’s Galaxy Express 999. At the same time, Star Blazers is one of Matsumoto’s greatest works. The series was an influential work that skyrocketed the creator’s career. The universe of Harlock, Maetel, and Juzo Okita had come to be through a sweeping tale of military intrigue, adventure, and drama. When the series aired on American airwaves, many members of the mainstream saw that animation could be far more than singing forest animals, and rabbits performing slapstick.
On the flip side, Star Blazers is an old title. The series hit American TV in 1979, or 32 years ago. It’s an unfortunate reality that, no matter how good a show is, many younger anime fans have zero interest in anything older than 2000. It’s hard to fault anybody in this case. The show’s character designs and animation definitely show their age, in comparison to titles from today, and even the Golden Age period. On top of that, Star Blazers is hardly an uncut product. Due to broadcast restrictions of the day, the show was toned down to air on television. Character names were changed, violence was toned down, and references to things like World War II and sexual content were altered. Nowadays, we are used to having anime air on TV (mostly) untouched. And, frankly, there’s little desire to go back to the olden days, with good reason.
Still, for everything that Star Blazers has against it, I hope people still give the series a chance. The show’s overall content, from the plot, to the philosophy, were surprisingly intact, and just as engrossing despite the limitations imposed. The edited version may not be the most ideal way to enjoy the series, but the version is still both significant and enjoyable, despite its limitations.