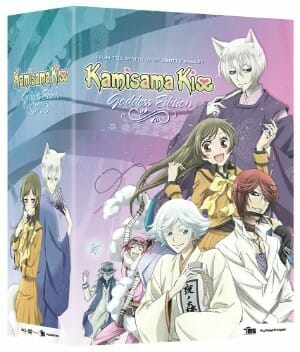 Kamisama Kiss is a 2012 romantic comedy that was directed by Akitaro Daichi. Yes, that Akitaro Daichi, who unleashed Fruits Basket, Animation Runner Kuromi, and Kodocha upon the anime world. The same Akitaro Daichi who’s become known for his mastery of all things spastic, and his penchant for utterly manic pacing in his shows.

Kamisama Kiss focuses on the life of Nanami Momozono, a girl was recently thrown into the world of hobos, winos, and bums after her father ran out on a mile-high stack of gambling debts. With nowhere to go and no money to her name, Nanami found herself taking up residence wherever the air was warm, and the ground was dry. Oh, the horror! Oh, the pain! It’s enough to make one curse the very man who put her there! Which, incidentally, is where the show kicks off proper. As Nanami is in the middle of cursing her father, a panicked cry echoes from nearby. When she goes to investigate, Nanami finds a strange man stuck in a tree, being terrorized by a dog. With a mighty shooing motion, Nanami drives the beast away, earning the gratitude of the mysterious stranger. One thing leads to another, and the topic turns to Nanami’s somewhat dire situation. The man, who takes some pity on the girl, and offers his home to her. To seal the deal, the man, who introduces himself as Mikage, gives Nanami a peck on the forehead before walking off to places unknown. 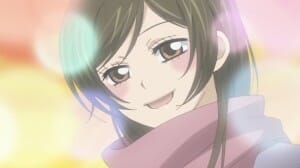 Nanami, as one would expect, is a bit perturbed, but hey! Free house! Upon arriving at the address, she finds that it’s not the normal swinging bachelor pad, but is instead a run-down shrine. Even worse, Tomoe, Mikage’s companion and (totes gorgeous) yokai familiar, is on a war-path, and nearly kills poor Nanami! Apparently, Mikage was the region’s local deity, and just saddled a poor homeless girl with the duty before shirking his duties yet again! Tomoe, both pissed at Mikage for his abandonment (he really didn’t go out for smokes) and unable to accept a human as a master, takes his leave. This is a rom-com, though, which means that one thing leads to another, and Tomoe is eventually bound by the contract of the kiss to serve Nanami as a loyal servant. Now, she has to find a way to deal with her new duties as a land god, while dealing the rambunctious Tomoe and the many ghouls and ghosts that would love to see Nanami’s name in the obituaries!

More than anything, the series is about Nanami, as she comes to grips with her new life as a Land God. Early episode plots tend to revolve around Nanami trying to keep some semblance of a normal life as she goes about her duties as a matchmaker goddess. All the while, Tomoe sighs and expresses his own frustration at Nanami’s sluggish progress, or her petty insistence on doing “human” things like going to school or getting ice cream in town. They argue, they bicker, and they take verbal cheap shots at one another. Come the end of each episode, though, Tomoe finds a way to show that he’s not totally a raging douche, and Nanami proves that she can do some godly things at times. The supernatural trappings help to breathe some life into the formula, but it’s still difficult to shake the fact that Kamisama Kiss is a typical romantic comedy, in many ways. The outcome is cut-and-dry from the outset, and key events seem to occur at a neat, predictable pace. The supernatural elements help to mask this somewhat, but mostly serve to give some flavor to the cast and setting. Suddenly, the school’s bad boy is a crow tengu gunning for Nanami’s position as Land God, or an episode plot suddenly becomes a chance for Nanami to pair up a shy guy and a talking fish. 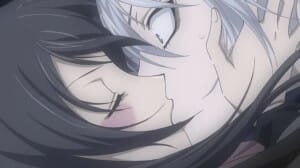 s plot isn’t the most ambitious, the show makes up the shortfall in its stellar cast. Nanami, especially, is a fun character as a person that’s thrust into a world that she doesn’t recognize. Where her spiritually adept companions will often shrug things off, Nanami will find herself being caught on the many minutiae of the yokai world. Things like talking messenger birds have her babbling in a freaked out stupor, and she will quickly dive into situations that may seem foolish to her companions. At the same time, Nanami manages to avoid being the stereotypical waif of a character. She’ll fight, she’ll argue, and she will verbally destroy those that wrong her. She holds grudges, and she’ll snap at those who push her buttons. The rest of the cast proves to be equally quirky and lovable, from Nanami’s spunky friend Ami to the bratty sky god Narukami. The various players interact with a wonderful chemistry, while themselves avoiding many of the tropes and stereotypes that tend to plague shows of this nature.

The series is tied together with a truly wonderful sense of humor. The show’s sight gags are set up well, and make great use of body language and facial cues to sell the scene. The dialogue gags take advantage of the chemistry between the cast members, to deliver countless surprisingly funny moments. Whether it’s Nanami babbling at turbo speed, or Tomoe bickering with snake spirit Mizuki, the show’s lighter moments are simply a joy to watch.

While Kamisama Kiss isn’t going to appear on the short list of classics, it’s still a fun series that’s worth a look. It’s a light, fluffy shoujo series that does a great job in leveraging its cast and its sense of humor to create a consistent, entertaining experience. While there are shows that have handled the formula more competently, there’s plenty to enjoy in Kamisama Kiss. 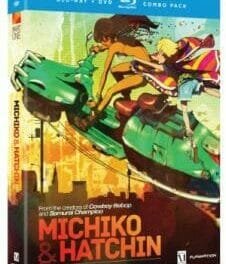 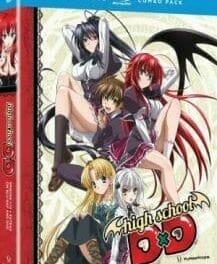