Tags: big hero 6, boxtrolls, how to train your dragon, kaguya-hime, oscars, song of the sea, studio ghibli, the tale of princess kaguya 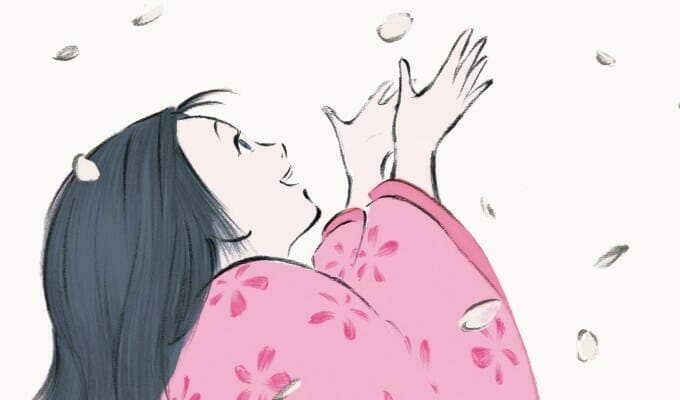 Earlier today, the Academy of Motion Pictures and Sciences announced their nominations for the 2014 Oscars. The notable announcement in our domain, though, comes in the Best Animated Feature category, where Isao Takahata’s The Tale of Princess Kaguya was revealed as a nominee. The film will compete against How to Train Your Dragon 2, Song of the Sea, Big Hero 6, and The Boxtrolls.

Last year, The Tale of Princess Kaguya was distributed to theaters by GKids. After 11 weeks, it earned a total of $570,660, making it the 20th highest-grossing anime film to hit US theaters. It’s Takahata’s first theatrical film since 1999’s My Neighbors The Yamadas, and adapts the classic Japanese folktale The Tale of the Bamboo Cutter.

The Tale of Princess Kaguya is one of those films that’s distinctly Takahata. It’s a gorgeous production, with a charming watercolor visual style, a haunting soundtrack, that aid in the fantastic delivery of a classic tale.

That said, it doesn’t have much of a chance of the win. While not impossible, the film faces incredibly stiff competition. Big Hero 6, a Disney production, is a surprising comic adaptation that’s been met with near-universal critical acclaim. Likewise, Dreamworks’s How To Train Your Dragon 2 received high marks, to the point that it took a Golden Globe for Best Animated Feature. The Boxtrolls and Irish-animated Song of the Sea are the two dark horses, as they were both comparatively smaller productions, though they received impressive praise and adoration from the community.

Whatever the outcome, though, it’s always great to see anime features make it this far into the Academy’s selection process. And, while there will undoubtedly be calls of one film being “robbed”, or shenanigans in the final results, the five films chosen are all fantastic contributions to animation as a whole.