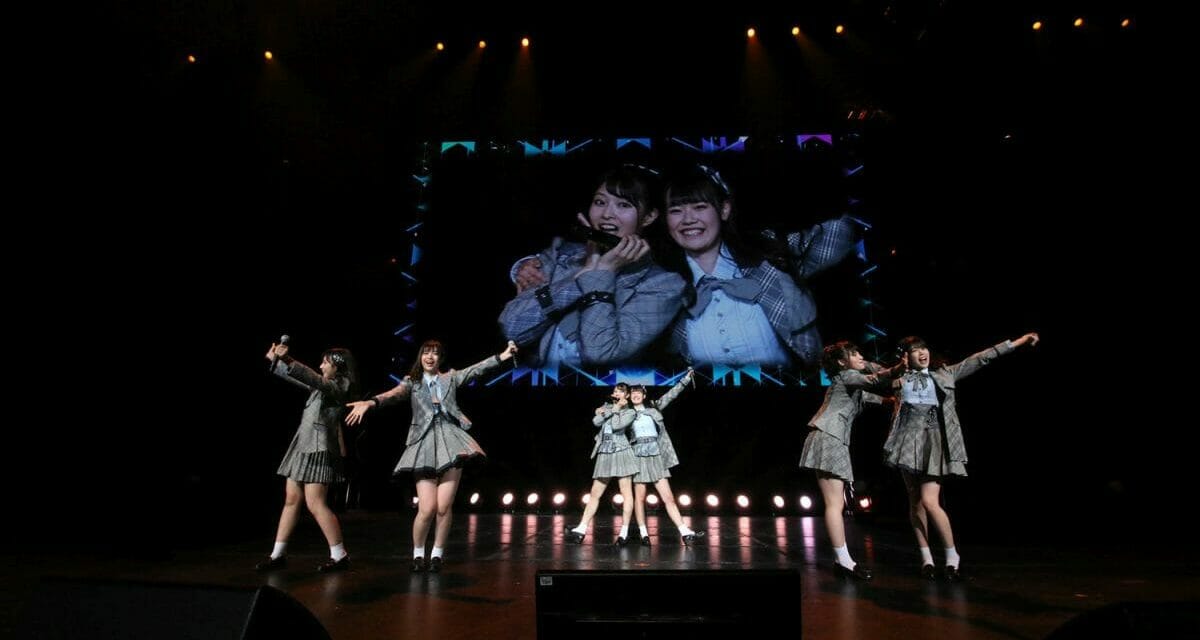 The final night of Anisong World Matsuri at Anime Expo showed off the power of idol groups. The Microsoft Theater was packed with cosplayers, who were eagerly showing off their outfits from their favorite idols.

The first group to take the stage was were THE [email protected] CINDERELLA GIRLS, who featureda lineup that hadn’t performed together in Los Angeles before:

Three members of the group (Yui Makino, Ruriko Aoki, and Kotomi Aihara) were making their Anime Expo debuts, while the other three (Rei Matsuzaki, Yuko Iida, and Tomoyo Kurosawa) were returning veterans. The  took the stage, clad in red-white-and-blue uniforms. They opened their act with Shine!! from their eponymous anime.

Afterwards, the group took some time to introduce themselves and talk to the audience. As each girl spoke, their card from THE [email protected] CINDERELLA GIRLS smartphone game (Cygames & Bandai Namco Entertainment) would flash on the screens. I couldn’t help but marvel at how quickly the audience could change the colors of their lightsticks to match the current idol on the screen. (A quick note about the game: The player takes the role of a  as producer, working to help the idol groups achieve stardom. It is exceedingly popular, with close to 200 idols represented in the game.)

The full group then returned to the stage, and Ruriko Aoki addressed the crowd:

“Thank you so much for today! Personally, this was my first time coming to LA so I’m having so much fun! We will do our best to come back to this stage as Cinderella girls. Thank you so much!”

Yui Makino expressed her gratitude for those who braved the record Los Angeles heat, “America producer-sama! Thank you for coming to see us!”

With the full group in attendance, the group jumped into their final song. Onegai! Cinderella was the first anime release for THE [email protected] CINDERELLA GIRLS, and it proved to be a crowd favorite.

i☆Ris is an idol group that also doubles as voice actresses. The group’s acting talent can be found in anime titles like Magical Girl Site and PriPara. The group opened up with Gensoukyoku WONDERLAND off of their first album, We are i☆Ris!!!

Next up was Changing point, from Magical Girl Site. Despite its cheerful name, Magical Girl Site is a horror anime, and the imagery on the screens was rather different than the sugary spectacle presented  onstage.

The high point of i☆Ris’ performance, though, was the PriPara medley (Make it!, Miracle☆Paradise, Realize). The crowd adored it. They followed up with another track from PriPara, Dream Parade.

Afterwards the group took a break to talk to the audience. They shared that it was their sixth birthday. The crowd was prepared, and showed off “Congratulations on 6 years!” signs. i☆Ris seemed genuinely touched that the fans knew and cared so much. Yuu Serizawa took a selfie with the audience.

For their final song, i☆Ris performed one of the most popular songs in the history of anime, We Are! from One Piece. It was another hit with the crowd, and a great way to finish the set.

AKB48 Team 8 had an opening video that played before the band came out to greet the audience. I know “gray-plaid uniforms” don’t sound exciting, but they made it work as they took the stage.

The group opened with their first hit, Aitakatta. It got the crowd going immediately. They followed with  Kibou teki refrain. Afterwards they took a bit of time to introduce themselves to the warmed-up crowd.  The attending members of Team 8 were Hijiri Tanikawa, Akari Sato, Nanase Yoshikawa, Ayaka Hidaritomo, Yuna Hattori, and Yurina Gyoten.

After finishing their introductions, the girls got right back into the music with hits Everyday, Kachūsha, and Iiwake Maybe. Suddenly, it was time for another brief break as they discussed their trip to America. They talked about their outing to the beach at Santa Monica (“Hot, hot!”), and the hamburgers (“So big!”). (Editor’s note: It was insanely hot that week. Also, you can find some pretty large hamburgers in southern California.)

After their brief chat, AKB48 returned to the music, with Hachinosu dance and Koisuru Fortune Cookie. The latter was a huge international hit, going viral in Thailand. It was also used in commercials for Just Dance on the Wii U. Hachinosu dance is off the group’s most recent single, Teacher, Teacher.

They closed with 365Nichi no Kamihikouki and 47 no Suteki na Machi e. When AKB48 had finished, they took some time to address the crowd:

“This is AKB48 Team 8’s first time performing in Los Angeles. We’re so happy that everyone’s having fun!”

As they were leaving, they shouted thanks to the crowd, and that they hoped to see them again.

(Editor’s Note: AKB48 Team 8 will be performing at the Day of 8 concert on August 8th.)

Finally, it was time for Shoko Nakagawa to return to the stage at Anime Expo. When her name flashed on the screens, the crowd started chanting “Shokotan!” She came out to an enormous wave of cheers, as she opened with Doridori from Pokemon XY. It was an apt choice, as she’s been hosting Pokemon Sunday for twelve years now. After the song ended, she greeted the crowd:

She continued: “I’m an otaku. Are you otaku? Yes! We are otaku!”

Huge roars. She went on:

“Ten years ago, I came to L.A. to shoot this music video (Tsuzuku Sekai, for Tengen Toppa Gurren Lagann).”

She jumped into the song. As she sang, I spent the entire video trying to figure out who the dude on the rooftop was. I’m wondering if it could possibly be Tommy Wiseau. Shokotan has a special connection with Gurren Lagann, which I’ll share shortly.

Here, she addressed the crowd again:

“Because of anisong, I’m not alone. We are all together.”

For her third song, she performed Ray Of Light, the final ending song of Fullmetal Alchemist: Brotherhood. Again, the video played behind her on stage. Her timing was dead solid perfect. It amazing to watch.

For her next selection, she sang Magical Circle from Mahoujin Guru Guru. If I’m remembering correctly, she led the audience in what can I can best describe as a “pen light dance.” Then again, my memory also says that when she was talking about being an otaku, she asked the audience if we liked cats. The answer in my case is, yes:

That’s Yao sitting down and Lady Bruce staring at the camera. Anyway! Moving back to the concert.

For her fifth song, Nakagawa played Pegasus Fantasy from Saint Seiya Omega. Again, more pen-light fun was had. Afterwards, she addressed the audience:

“This next song is my favorite anime song. Let’s sing together!”

Those of us who remembered 2008 knew what was coming. The first few notes from A Cruel Angel’s Thesis (Neon Genesis Evangelion) drew a roar from the crowd. As so many people were singing along, she let the crowd sing the chorus.

I promised I would share her connection to Gurren Lagann. Here it is from her interview with Anime News Network’s Nikki Flores:

“There’s a bit of a story behind when I first heard about Sorairo Days. I was really happy because I always wanted to sing an anime song, but when I went into the recording session I thought somebody else was going to sing it too and that I wasn’t the only candidate for this song. I had mixed feelings, and was kind of anxious about it. I did my best because I really wanted it. After the recording I heard the management say that it was going to be me, and I was speechless. Before the first episode came out I kept wondering if it had really happened. When episode one came out, I went to Akihabara and I actually saw this man buying my CD. I still remember that I wanted to shake hands with him, but I thought I might look like a weirdo or something. I was really happy and it finally made me realize that it had happened.” -Shoko Nakagawa

It was the song that launched her to stardom and the most memorable track from one of the truly beloved anime from the past few decades. Sorairo Days (from Tengen Toppa Gurren Lagann) brought down the house. Reach for the stars and beyond!

After Shokotan’s set finished she addressed the crowd:

“Tonight is the best night ever! My dream is to come back next year. Ganbarimasu!”

She invited the rest of the groups joined to join her on stage. i☆Ris came out wearing In-N-Out Burger hats. That brought cheers and applause from the audience.

AKB 48 Team 8, i☆Ris, and THE [email protected] CINDERELLA GIRLS gave their goodbyes. Shotokan again reminded us “We are all Otaku!”

‘Tis true. It was a great close to another great run from Anisong World Matsuri and Anime Expo. Expectations are already high for 2019.

The performers can be found online at:

Anime Conventions in the UK, and How They Could Become Better 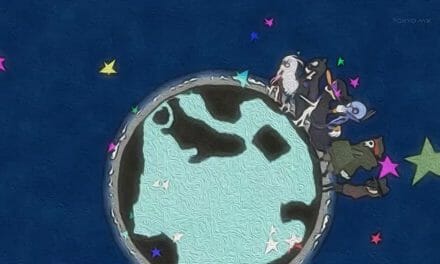 The Legacy of Hoshizora Meteo