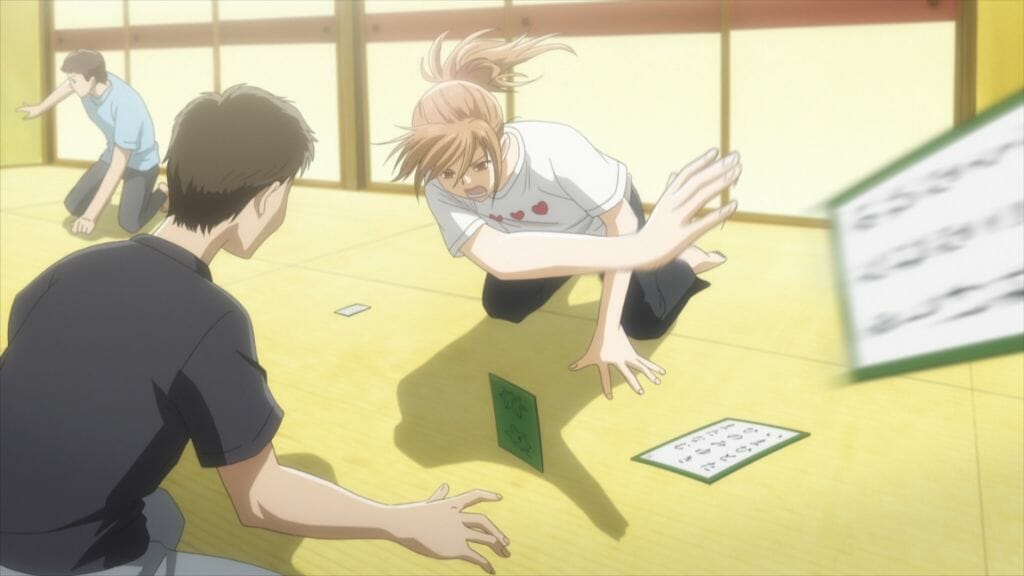 And I promptly ignored it.

At the time, I had way too much on my plate to deal with. I mean, this is the year that Madoka Magica, Fate/Zero, Bunny Drop, and so many others first hit the web. It was a great year for anime. A flowery show about poems that I knew nothing about seemed to be pretty far outside of my wheelhouse.

A few weeks after it premiered, though, one of the writers on my outlet’s staff at the time started bugging me about it. A lot. Like, we’re talking a couple of emails and IMs every day asking me if I had checked it out yet. I was annoyed by this but, also intrigued as this was a person whom I knew and trusted. So, I relented. On one rainy Seattle afternoon, I gave it a shot, and my whole world was instantly changed.

Chihayafuru started its life as a manga by Yuki Suetsugu, which began its run in the December 2007 issue of Kodansha’s Be Love magazine. Since it began, the title has seen 40 compiled volumes hit stores, and continues to be published to this day. It was awarded the second-ever Manga Taisho award (an award given out to newer manga series in Japan) in 2009 and took home the 35th Kodansha Manga Award in the shōjo manga category in 2011.

The series received a pair of 25-episode anime seasons by famed studio Madhouse, which aired in fall 2011 and Winter 2013, respectively. More recently, as well as a trilogy of live-action movies that hit Japanese theaters between 2016 and 2018.

Chihayafuru begins with a tale of young puppy love. A young boy named Wataru hails from the country, though his thick accent makes him a prime target for bullying. The only one who dares to stand up for the boy is a girl named Chihaya, who learns that Wataru has a secret: he’s secretly a prodigy in the card game Hyakunin Isshu karuta.

Inspired by his passion, Chihaya and her friend, Taichi, take up the game for themselves. They aim to become the “Queen” and “Master” of the game, respectively, because it would make them the best in the world at something.

Over time, the circumstances of life see the three grade schoolers separated Still, Chihaya doesn’t lose hope. She believes wholeheartedly that their love of the game will bring them all back together. This comes true, to a point, when she is reunited with Taichi in high school. Unfortunately for Chihaya, the day she achieves Rank A is the day she learns that Wataru has changed dramatically since the last time they spoke, and has given up on the game entirely.

Now, you may have come across a couple of words or phrases within that synopsis that are unfamiliar to you, with the most important of which being the “Hyakunin Isshu.” For those who haven’t studied Japanese poetry at some point in their lives (which, I think, is most of us), the Hyakunin Isshu is a collection of one hundred waka poems written by one hundred different poets. In competitive karuta, the point of the game is to listen to a reader recite the first half of a poem and correctly identify the card in front of them (or their opponent) which contains the second half of the poem.

Sounds tough? Trust me, it is!

An anime series about a competitive card game might sound boring at the outset, but Chihayafuru is anything but. Over the course of the first season, Chihaya’s high school karuta club grows, one member at a time. Everyone joins the club for different reasons. Kanade, for example, believes that playing karuta means getting to sit around in beautiful hakama and discuss the poems. She’s utterly floored when she finds out what the game actually entails.

Meanwhile, Tsutomu (or “Desktomu” as Chihaya calls him) is pressured to join under the pretense that it will help his studying. This leads to him struggling with his emotions when he finds out that being smart doesn’t automatically mean that you’ll be good at something new right away. It’s situations just like this that make Chihayafuru such an amazing hidden gem in the world of anime.

It’s easy to dismiss this series for not being “sportsy enough” or “too bogged down in emotion”, given that this is a sports anime at heart. Anyone who has sat through all fifty episodes, though, can tell you that all of these arguments are straight-up bollocks.

Folks craving the thrill of high-impact sports action should check out the episodes that feature the club competing at Omi Jingu. The team’s internal monologues race with intensity, as they struggle to defeat opponent after opponent in grueling matches that test the characters’ physical and mental endurance.

If you’re the type who worries that this series leans too heavily on emotion, then you should check the episodes where Tsutomu prepares to quit the club in the show’s first season. His frustration at losing his first match is relatable, and it’s nearly impossible to not sympathize with his struggle to fit in with his new friends and help achieve their goals.

That said, Chihayafuru goes far beyond being just a charming experience. It is completely engrossing. This is a series that you can start watching in the morning and, before long you’ll find that it’s already dark outside. It’s just that good.

Some may argue that the show’s second season is a bit weaker, due to its inclusion of more characters, who tend to stray toward the odder side of things. Personally, I’d argue that the second season is just as strong because of these new cast members. While at first, the karuta club sees a surge of new members who only want to join because of Taichi, only two actually stick with the club beyond the first few episodes:

Over the course of the second season, these new players show incredible amounts of growth. At the same time, the story of Chihaya attempting to reconnect with Wataru while completely missing the romantic cues that she is getting from Taichi is unfolding in the background.

It is now going on six long years since Chihayafuru’s second season signed off. The phrase “Chihayafuru Season 3 when?” had taken on almost meme status with the show’s most ardent fans. Once the announcement was made that a third season was on the way, though, fans around the world let out a collective sigh of relief as tears of joy streamed down their cheeks. This is a series that few ever saw being as successful as it is. Still, somehow, in some way, this series found its audience.

In April 2019, Chihayafuru will return to the airwaves of Japan. The cast and crew who made this series a must-see will be back, and two cours are planned to air. I urge you to spend the next three months catching up on one of anime’s best-kept secrets and experiencing the joy along with the rest of us who have long known about the magic that this series has to offer. You will not regret it.

Settling Into A New Role