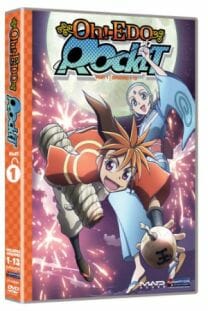 The content of this piece was written during a viewing of the first episode of Oh! Edo Rocket on January 20, 2011. Edits have been made for spelling and grammar, but the rest is completely untouched, and un-edited from its original format.
If this show could make up its damn mind on what it wanted to be, it could be good. However, as it is, the series needs a ton of work to even be decent, let alone good.

9:41 PM: Good evening, everyone, and welcome to another fun showblog.

9:42 PM: Tonight’s piece is a request from [email protected].

9:43 PM: Anyway, before I start diving into despair, let’s get onto the basics:

9:47 PM: Seriously, I have no idea what’s going on – it went from fireworks to monster fights… #wtfjapan

9:48 PM: The peasants are awesome already. :3 They look like they belong in Digi Charat.

9:48 PM: And they’re bitching about their strife while being SO ADORABLE :D

9:49 PM: Back to the drunken peasants talking about possible work.

9:53 PM: It’s just jumping between three genres at the drop of a hat.

9:54 PM: The fight choreography is actually pretty well-done. I have to admit that much. :) And the jazz-inspired music is freaking epic.

9:55 PM: Back to the fireworks makers

9:56 PM: And the epic townspeople seem to enjoy it… except gloomy okama

9:57 PM: And the monster likes the fireworks. >> I think I see where this is going now

9:58 PM: Anyway, the next day – Zetsubou is in despair! :O …nah, he’s just cleaning and taking the epic inventor in

9:58 PM: I see THIS end now. >_> Apparently, the village leader outlawed luxuries… for some reason

10:01 PM: Oops. :D Seikichi got caught for setting off fireworks

10:03 PM: Locksmith Gin comes to save the day. According to his story, theyw ere doing a job

10:04 PM: This story is getting wilder and wilder.

10:07 PM: Looks like Seikichi has a reason for working in Edo, where he’s not welcome by the law >_>

10:09 PM: Looks like Seikichi has a guest… who burned the poor guy’s tatami

10:10 PM: This girl apparently knows about him… and she has ideas.

10:12 PM: The show has potential. However, the first episode just didn’t know where it wanted to go

10:13 PM: I’ll have to give it another episode or two before I can answer for certain.

Oh! Edo Rocket is distributed in America by FUNimation.
The series can be purchased at Right Stuf.
Thanks to FUNimation for providing a review copy!