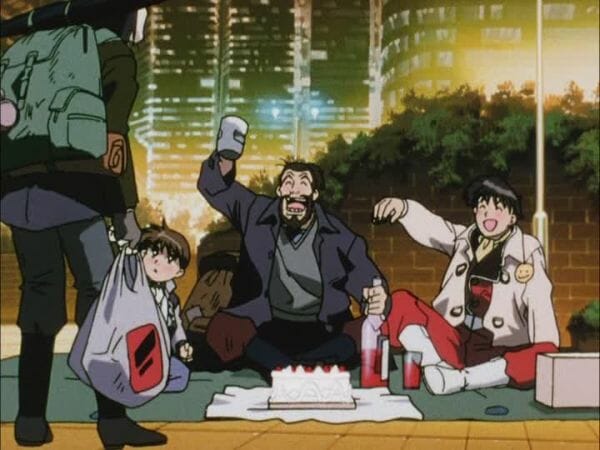 The holidays are here, which means that stores are packed with frantic shoppers and news networks are raging over whether Santa Claus was white or not. It’s that unusual mix of joy, stress, and outright hate that seems to personify the season more and more with each passing year. Still, year after year, families gather to watch the holiday classics like How The Grinch Stole Christmas! or Santa Claus Is Comin’ To Town.

In Japan, Christmas is a time for gifts and parties, for sharing good times and creating fond memories together. Families share Christmas cakes and KFC, and Santa makes his rounds to the good boys and girls of the nation. Naturally, the holiday is a perfect fit for the anime world, where bits of the country’s culture seep into the most unexpected places.

In commemoration of the holiday, we’ve selected five anime Christmas specials that would be a perfect fit for your holiday gatherings.

In Santa Claus Panic, Miyuki and Natsumi are charged with a most unusual task. A crooked Santa’s been breaking into homes across the city, and pilfering everything from the jewelry to the holiday turkey. The girls need to work quickly, as the holiday is coming, and once Christmas is over, this grinch will fly the coop! To make matters worse, a mysterious vigilante calling himself the Santa Man is dishing out ironic punishments to those he deems naughty, while giving ghastly, if well-meaning, rewards to those he deems nice! Will Miyuki and Natsumi be able to deal with their target, while disposing of the mysterious Santa Man?

Santa Claus Panic is, without a doubt, one of my favorite anime Christmas specials. The core plot of the thieving Kringle was fantastic in itself. But the addition of Santa man simply ensured that the situation would constantly escalate, to the levels of absurdity and beyond. The jokes are well-written and brilliantly delivered, and the story itself is one that will tug at the heartstrings. It’s a sweet episode that’s simply fun to watch, even for those who’ve never been exposed to the rest of the series.

Pitter Patter Christmas Eve starts off like many episodes of Urusei Yatsura: Ataru wants to look up ladies’ skirts, Lum disapproves, and Ataru’s friends are painted green with envy. Ataru’s friends, fed up with the love and affection (and crippling pain) that their comrade receives, come up with a plot to steal the sassy Lum away from him. It’s a stupid plan, fueled by cheap ramen and hormonal rage, that involves their writing a letter to Ataru asking him out on a Christmas Eve date. The letter is signed “Kumino Otoko”, which translates to “the guys in class.” Ataru, ever the witless pervert, gleefully hurries off to his fake date. The guys, on the other hand, hired a random girl to play Kumino, and pull all manner of folks, from newspaper photographers to luche libre wrestlers, into the plan to fill Ataru’s life with even more misery. Lum, having none of this, manages to pull her darling out of the fire, and into a special Christmas date that neither would forget.

Pitter Patter Christmas Eve is, by far, one of my favorite Urusei Yatsura episodes. It’s one of the first times that Lum is portayed as more than her typical carefree persona. Instead, viewers get to see her as a person, a soft, loving character that simply wants what’s best for her beloved. Th overall tone of the episode is nowhere near as manic as those before it, and gladly sacrifices the trademark slapstick comedy for some incredibly sweet moments between Ataru and Lum. The Christmas imagery is, thankfully, on the subdued side as it’s generally limited to a few background items and random Christmas jingles filtering through the music. 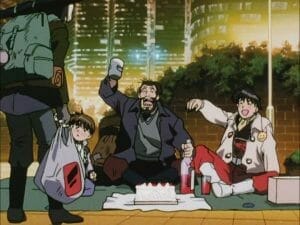 It’s Christmas Eve in the capital, and the military is hitting a holiday lull in activity. Tylor’s managed to do what many thought impossible: he’s managed to get a date with the lovely Yuriko Star. For the evening, Yuriko went above and beyond to ensure that everything was perfect, from her hair to her Christmas gift. Tylor, on the other hand, was busy living up to his namesake. As he moseys out of the military base, Tylor picks up a follower in the form of a bratty kid named Bob. From there, his night becomes one of unexpected fun. Everything the kid does to get on Tylor’s nerves falls flat, whether it’s petty theft, or delivering a ticking box to a military base. Instead, Tylor does what he does best, as he sets up impromptu drinking parties with the bums in the square, and casually breaks appointments with his fellow officers. Yuriko, on the other hand, waits. As the time ticks by, Yuriko’s prospects begin to dim. Will Tylor actually keep his promise for once, and make Yuriko’s wait worthwhile?

White Christmas is, quite possibly, one of the strongest Christmas specials, period. It focuses on the many things that matter about the holidays: family, togetherness, and friends, and wraps the entire experience into a fun, yet touching installment. If there’s one episode that’s on this list that everyone should see, it’s this one.

Keroro Christmas Battle kicks off with a briefing of the highest order. Keroro, speaks, with motivation in his every word, about his latest scheme to conquer the planet. His plot is a simple one: use the distraction of Christmas as an opening to conquer the planet in one fell swoop. Keroro’s real motivations are quickly outed, though, as he’s forced to admit that he wants to use the bonus money from the mission to splurge on Gunpla. Dororo drops out, because he refuses to steal the dreams of children. Tamama isn’t far behind, as he proudly proclaims that he wants to be good for Santa. Keroro, fearing the wrath of the jolly man in red, continues to forge on, and the rest of the platoon begins to research the holiday. Fueled by images of Christmas love and by prior obligations, the team drops out one after another, leaving Keroro alone in his endeavors. The promise of Gunpla is a strong motivator, though, which leads Keroro on a manhunt for Santa. Failing that, he enters a rare alliance with do-gooder 556, and takes it upon himself to spread holiday cheer to the world.

For all intents and purposes, this is a typical episode of Sgt. Frog. It’s manic, and goofy where it needs to be. Keroro doesn’t learn any lessons, the cast doesn’t learn some incredible lesson, and pastel ponies don’t burst from nowhere espousing the magic of friendship. Instead, it’s just a fun episode that uses the Christmas backdrop as both an opportunity for comedy, and as a way to show the characters settling into life on Earth. Customs, from Santa to the Christmas Eve date traditions are used wonderfully to push the characters into hilariously desperate situations, whther it’s Keroro tackling a wandering Santa, or Gororo’s being swayed by the naiive thoughts of young love. 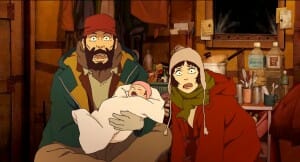 Tokyo Godfathers is a the third film by the late Satoshi Kon. The film revolves around three homeless people: Gin, a middle-aged alcoholic, Hana, an aging trans-woman and drag queen, and Miyuki, a runaway girl. The three are brought together by coincidence on Christmas Eve, when they find an abandoned baby in the trash. Along with the child is a note asking the finder to take care of the child, and a bag of clues to the identity of her parents.

There’s not much tha can really be said that hasn’t been said thousands of times over in far better ways. The film is, in every meaning of the word, a masterpiece. The plot, while meticulously planned and plotted, flows, as twists and coincidences come about naturally, the the drama fuels itself with the various people that live in the world. The characters are brilliantly written, and seem like they would be people one could easily run into in the street. The detail in the world is unmatched, and the animation is simply a marvel to behold. The entire experience builds upon the world, and the people to deliver an experience that’s both exciting and incredibly personal. It’s a film that uses the medium of animation to create something so beautiful, so utterly magnificent that it reaches beyond the boundaries of region, language, and culture to appeal to audiences everywhere. To make a long story short, you need to see this film. 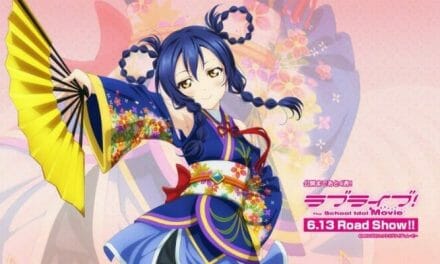