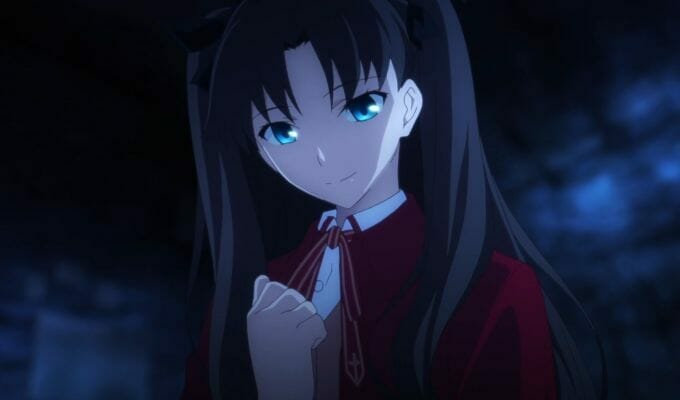 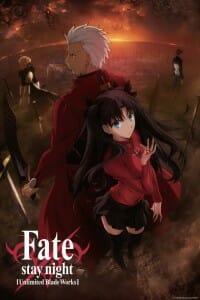 Fate/Stay Night: Unlimited Blade Works is, without a doubt, the most anticipated series for a lot of people this season. Previously, the title received a film adaptation by Studio Deen that was met with generally middling reception. Criticisms tended to focus on a generally rushed, incomplete feeling through the production, as well as a barrier of entry that would scare away all but the most devoted fans.

The 2014 TV adaptation aims to fix that. With animation by UFOTable, and much of the staff that made Fate/Zero a success with fans and newcomers alike, expectations were high for Unlimited Blade Works. With a 26 episode run, Fate/Stay Night: Unlimited Blade Works has a chance to redeem itself against the previous film, while it ensnares a new generation of devoted Type-Moon fans.

The series is set in Fuyuki City, a picturesque metropolis in the mountains. The streets are peaceful, the people are friendly, and everything simply seems perfect. Beneath the pleasant exterior and the happy faces, though, Fuyuki City is a realm of great importance. For centuries, it’s served as the setting for the Holy Grail Wars.

The Holy Grail is an artifact of great power. It’s said to be able to grant any one wish from its possessor. In each war, seven magically gifted masters are granted a Heroic Spirit, who fights on his behalf. The master and servant pair, after entering into a contract with one another, battle to the death, until one pair remains.

Rin Tohsaka is a high school student in Fuyuki City. She’s a cheerful, popular girl who stands as the sole heiress to the prestigious Tohsaka estate. Though her father left this mortal coil long ago, he left Rin a truly amazing legacy. The Tohsaka family is one of the seven chosen to battle in the Holy Grail Wars. Though they never won a war, the Tohsakas were always renowned for their magical prowess. Rin is no exception. 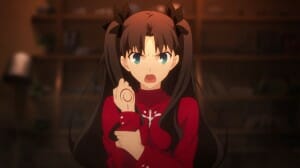 With the next Holy Grail war coming, Rin is tasked with summoning her servant. And, for a gifted mage as herself, Rin aims to bring forth the mighty Saber servant. After all, it should be a piece of cake for her, right?

Not quite. Instead of the Saber servant she so desired, Rin is instead granted Archer: a smart-mouthed amnesiac who is initially reluctant to follow his new master’s orders. With the Holy Grail War beginning, will Rin be able to work with Archer to lead her family to victory?

For fans of the original, Fate/Stay Night: Unlimited Blade Works doesn’t tread any new ground. The plot is identical to that of the visual novel, as well as the 2010 film. Those looking for a deviation will be sorely disappointed.

For everyone else, though, the première was simply a joy to watch.

The first episode basically serves to set up the core characters, the major plot points, and generally ready the viewer for the rest of the series. Given the generally dense material, this could have easily just been an info-dump that uses facts and figures as a cudgel to beat the point into viewers’ heads.

Instead, though, the first episode of Unlimited Blade Works uses its first impression to really just build a world of wonder and fantasy for the viewer. The characters are introduced naturally, and their quirks are allowed to really shine through dialogue and actions. This is particularly evident in the fact that the episode’s first ten minutes are devoted entirely toward Rin getting ready for an early school day. The segment really burns an image into the viewer’s mind of who Rin Tohsaka really is. She’s impulsive and a bit hard-headed, but generally just and moral in her actions. And, it’s through this lens that other characters, from the arrogant yet charming Archer, to Rin’s many charmingly offbeat classmates, are introduced. 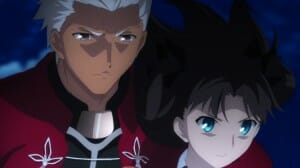 Information is only given as needed, and finer details aren’t stressed over until absolutely necessary. This includes major events like the Holy Grail Wars, the Servants, and even the Holy Grail itself. When major information is delivered, it’s given in a manner that feel natural, and easy to digest, rather than some opaque jumble of facts that one will be expected to regurgitate later. The pacing is wonderful, as action scenes build and release, to satisfying payoffs, and character interactions between Rin and Archer prove to be simply delightful.

Fate/Stay Night: Unlimited Blade Works blends this all together with a gorgeous visual style and simply divine presentation. The character designs are clean and attractive, and really stand out from one another. Whether it’s Rin, who sports a striking red and black style, or the Lancer whose deep blue armor contrasts with a sick, glinting grin. The landscapes are simply amazing, with countless small details that help to breathe life into the world.

The show’s animation is just plain gorgeous. The character movement is fluid, and battle choreography is incredible. The episode’s climactic battle between Lancer and Archer is a thing of beauty, as their motions play out like a brutal dance that will leave all but the most jaded viewers breathless.

Fate/Stay Night: Unlimited Blade Works’s first episode is a brilliant start to the series. If the show can maintain the overall quality shown in this installment, then fans new and old will certainly be in for a wonderful experience.