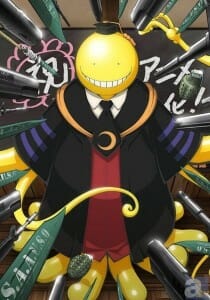 In today’s industry, it’s pretty much a given that a popular manga series will eventually get an anime adaptation. Doubly so if the title was published in Shonen Jump. Assassination Classroom (Anasatsu Kyōshitsu) is the latest in Shonen Jump’s hit parade to be animated. And, with a winning mix of comedy and action, it’s possible that the anime series could quickly become a fan favorite.

Assassination Classroom is set in an alternate version of Earth. In this world, 70% of the moon was destroyed by a mysterious creature, giving it a permanent crescent shape. The creature, being the bad guy sort, proclaimed that he would deliver the same punishment unto Earth in a year’s time. Militaries would throw their finest warriors at the beast, only to be swatted away like flies. And the creature, well… the creature was getting bored.

Rather than just wait out the clock, it came up with a plan. It’s a simple idea: take the role of a teacher at Kunigigaoka Middle School’s infamous Class 3-E. His students will be trained in the ways of the assassin, as well as the Three “R”s. The students aren’t in it to save the world from total destruction, though. The creature’s life has a price attached. The student who successfully murders this otherworldly instructor (dubbed “Korosensei” or “Killing Teacher”) will receive the princely reward of ¥10 billion ($84.8 million USD).

Of course, killing Korosensei is easier said than done. The teacher, being  being the furthest thing from human, is able to go beyond petty human limitations. He can move at Mach 20, and his eight tendrils mean that he can swat away threats in any direction.

He’s also able to do something that the students never thought possible. Korosensei shows the class, which is made of of misfits, troublemakers, and underperformars, legitimacy. In a school where the class is ghettoized, isolated from the rest of the school and cut off from club activity, Korosensei doesn’t worry. All he desires is to have his students learn and improve themselves.

Much to my surprise, there is a lot to like in Assassination Classroom. Much of the comedy comes from Korosensei and his antics, regardless of the darker notion that students are being forced to try to kill him. Korosensei’s larger than life presence is really helped by his voice actor, Jun Fukuyama, who hams it up at every opportunity.

The series, which was produced by Lerche, looks great, with distinct character designs, and an interesting style that frames characters with thick, black outlines.

Personally, I’m not exactly sure where this adaptation will go, or how faithful it will be to its source material. That said, though, those looking for a good comedy this season need not look any further.