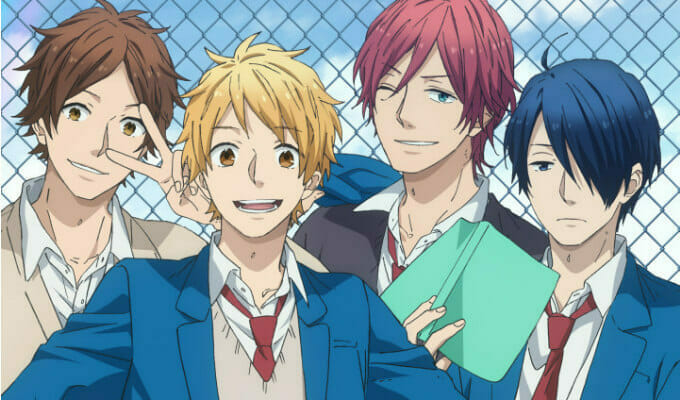 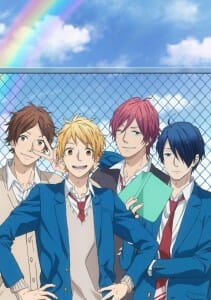 It’s a double-dose of pretty-boy action!

Rainbow Days is based on Minami Mizuno’s Nijiiro Days manga. The series is being directed by the team of Chief Director Tetsuro Amino (Broken Blade) and Tomihiko Ohkubo (Final Fantasy: Legend of the Crystals). Aki Itami (The Comic Artist and His Assistants) is in charge of series composition.

After getting dumped on Christmas day, high school boy and hopeless romantic Natsuki Hashiba crosses paths with Anna, an aloof girl in a Santa outfit passing out tissues. For him it’s love at first sight, for her… not so much. With help from his best friends—a playboy, an otaku, and a nice guy with a sadistic streak—Natsuki sets out to win Anna’s heart and heal his own heartbreak along the way.

Each episode of Rainbow Days is divided into two parts. The first segment is the main anime series. The second is a live-action series titled club RAINBOW!, which features behind-the-scenes looks into the show’s production and the Japanese voice acting career as a whole.

If you just can’t get enough of the Rainbow Daysanime, or the original manga it’s based on, club RAINBOW is sure to be a fun, cute, can’t-miss addition to your watch list! Join the main voice cast of Rainbow Days as they share behind-the-scenes stories, participate in a variety of games and events that appear in the show, and explore the city of Hokkaido trying to find the real-world locations that served as inspiration for the anime’s setting.