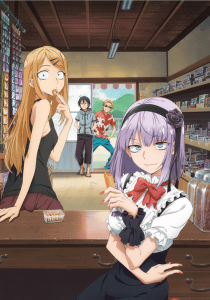 Business will be open for those seeking sweet treats in the Middle East!

Earlier today, Crunchyroll announced that they will stream Dagashi Kashi on their digital platform. The series will hit the service on January 10, at 6:00AM Pacific (9:00AM Eastern). Subscribers in the Middle East (excluding Turkey) and North Africa will be able to catch the series.

Kokonotsu Shikada is the heir to his father’s candy shop, but, despite his father’s wishes, he would rather be a manga author instead. One fateful day, a cute but strange girl, Hotaru Shidare, starts visiting the store day after day to convince Kokonotsu to take over his father’s business.