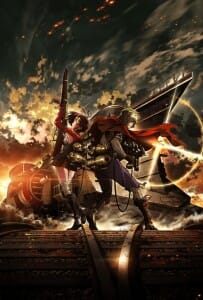 Amazon’s getting into the simulcast game with a power play!

Earlier today, Amazon and Fuji TV announced that the two companies signed an exclusive distribution agreement. Amazon’s Prime Video service will be the exclusive streaming home for shows on Fuji TV’s Noitamina block. In addition, the first episode of new Noitamina titles will hit Amazon TV before they air on Japanese TV. In addition, Amazon will simulcast shows outside of Japan.

The first title named in the agreement is Kabaneri of the Iron Fortress, which will stream two hours after their TV. The show, which will air on Fuji TV on Fridays at 12:55AM local time, will hit Amazon’s platform at 3:00AM the same day.

As of press time, it’s unknown as to whether Amazon indicate holds exclusive digital licenses to Noitamina titles outside of Japan.

Earlier this year, Amazon Studios head Roy Price revealed that Amazon would stream Kabaneri of the Iron Fortress in both Japan and the United States.

"Kabaneri Of the Iron Fortress" (Trailer) coming to Amazon Prime Japan in April https://t.co/Rl6ftZlMDP via @YouTube

Kabaneri of the Iron Fortress will hit Japanese TV on April 7. Two promo videos and several character visuals were released to promote the title, which you can check out below.