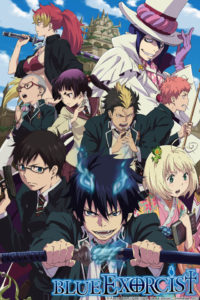 Rin Okumura’s ready to return for one more round.

Eleven cast members are returning from the first Blue Exorcist series, including:

In the late Edo Period, a demon known as the Impure King killed thousands of people. After defeating the demon, the Knights of the True Cross kept its left eye safely sealed away on Academy grounds – but now someone has stolen it! Hearing the thief has taken a child hostage, Yukio and Rin go to help. The investigation and pursuit will lead Rin and his friends to Kyoto and involve them even deeper in a sinister plot! But will his friends’ knowledge that Rin is the son of Satan drive a wedge between them?

Blue Exorcist is based on Kazue Kato’s manga of the same name. The ongoing manga kicked off in the pages of Jump SQ in April 2009, and spans 17 collected volumes.

Aniplex of America holds the rights to the Blue Exorcist TV series, OVA, and film in North America. The TV series is currently available in its entirety on Crunchyroll.