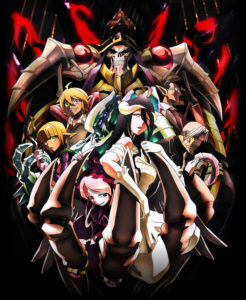 Make way, for the Overlord has arrived!

Earlier today, Funimation announced that the English dub cast for Overlord. The series will star the following:

Kyle Phillips is directing the adaptation, with Jeremy Woods and Domonique French serving as ADR Engineers. Josh Grelle is lead writer on the project, while Andrew Tipps works as mix engineer.

Funimation will release Overlord on DVD and Blu-Ray on November 8.

Overlord debuted in the summer 2015 broadcast season. Funimation streamed the show as it aired on their FunimationNow service. They describe the show as:

From the studio that brought you Death Parade, Parasyte, and No Game No Life comes a series that takes place in the world of Yggdrasil, an MMORPG that’s scheduled to be shut down permanently. With no family or friends outside the game, veteran player Momonga refuses to log out. As the servers go dark, he discovers that the world inside the game continues to change as NPCs begin to develop personalities and minds of their own. With a new world at his fingertips, Momonga decides to use his power and skill to take control of Yggdrasil and become its overlord.