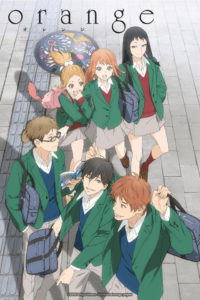 Before you ask: No, this isn’t the show about the women’s prison.

Earlier today, Funimation announced the English dub cast for Orange. The series will star the following:

Jerry Jewell will direct the adaptation, which features scripts by Jamie Marchi. Patrick Morphy will work as ADR engineer, while Nathanael Harrison serves as Mix Engineer.

The series originally aired during the Summer 2016 broadcast season. Crunchyroll streamed Orange as it aired in Japan. They describe it as: