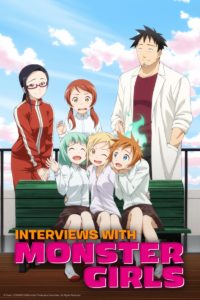 It’s time to meet the demis that walk among us!

Yesterday, Funimation unveiled their English dub cast for Interviews with Monster Girls. The series will star the following:

Jad Saxton is directing the adaptation, which features scripts by Kristen McGuire. James Baker is working as ADR Engineer, while Adrian Cook served as Mix Engineer.

Interviews with Monster Girls is based on Petosu’s manga of the same name. Ryo Ando is directing the project at A-1 Pictures, with Tetsuya Kawakami (The Asterisk War, Nanana’s Buried Treasure) providing character designs. Takao Yoshioka (Elfen Lied, High School DxD) is in charge of series composition.

This is a stimulating and heartfelt school demi-human comedy featuring those very unique “demis” and a high school teacher named Takahashi Tetsuo, who’s highly interested in learning more about their daily lives and habits.