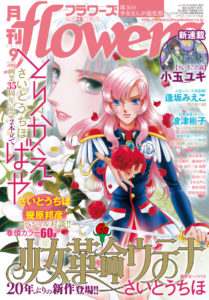 The gates to the Ohtori Academy will open once more, even if only for a short time.

The latest issue of Shogakukan’s Flowers magazine revealed that Chiho Saitō is working on a new chapter of her Revolutionary Girl Utena manga. Though details are scant as of press time, the chapter is slated for a Winter 2017 début.

Flowers magazine published another new chapter today, titled Shōjo Kakumei Utena After the Revolution. The new chapter is set after the events of the original manga’s final installment. Specifically, the chapter focuses on a certain special person who visits the Ohtori Academy.

The magazine also features a conversation between Saito and Utena anime director Kunihiko Ikuhara. The two discuss their thoughts on the work for the first time in 20 years.

The Revolutionary Girl Utena manga launched in Shogakukan’s Ciao magazine in 1996. The series spans five collected volumes. Viz Media currently holds the rights to the series, which they describe as:

Lured into the twisted duels at Ohtori Academy, can Utena become the prince she’s been waiting to meet?

When mangaka Chiho Saito teamed up with anime director Kunihiko Ikuhara (Sailor Moon) and a group of talented creators to form Be-Papas, it ignited a firestorm of creative and imaginative storytelling that resulted in Revolutionary Girl Utena, a modern classic. This deluxe box set contains the entire series of Revolutionary Girl Utena plus The Adolescence of Utena in two hardcover manga volumes. Color pages and a poster are included.

The 39-episode series originally aired in 1997. Right Stuf released the series in three DVD sets in North America in 2011. Central Park Media released the series on VHS and DVD between 1998-2004. Nozomi Entertainment rescued the license in 2010, and released Utena as a series of limited edition DVD boxes, which featured remastered audio and video.

“Never lose that strength or nobility, even when you grow up.” When Utena was just a child and in the depths of sorrow, she found salvation in those words. They were the words of a prince, who wrapped her in his rose-scented embrace and bestowed upon her both a ring and the promise that it would lead her to him again. She never forgot the encounter. In fact, she was so impressed that she aspired to be like the prince and also help those in need. Now a spirited teenager, Utena attends the prestigious Ohtori Academy. However, her strong sense of chivalry soon places her at odds with the school’s student council and thrusts her into a series of mysterious and dangerous duels against its members. Kiss Him, Not Me Gets New Key Visual and Premiere Date