Tags: in this corner of the world, mappa, production 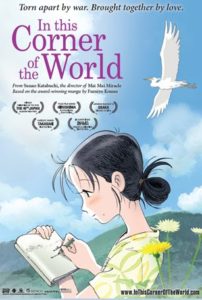 This corner of the world is getting a little bit bigger.

Earlier today, In This Corner of the World film producer Taro Maki confirmed that the feature will receive an extended version. Maki noted that the staff hasn’t set a release window for this new version, though director Sunao Katabuchi confirmed that he is working on the project.

Both Maki and Katabuchi were guests, along with actors Non (Rena Nounen), Minori Omi, and Nanase Iwai, at a Tokyo screening event to commemorate the feature’s first anniversary.

In This Corner of the World hit Japanese theaters on November 12, 2016. Funimation Films and Shout! Factory teamed up to give the feature North American theatrical runs on August 11, 2017 (USA) and August 18, 2017 (Canada).