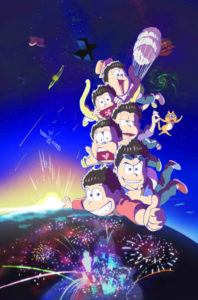 Get ready for even more outrageous Osomatsu antics!

Earlier today, Docomo’s dTV service announced that they will be the exclusive providers for a series of Mr. Osomatsu anime shorts. The new series, which carries the tentative title of dMatsu-san, will launch on January 9, at noon local time.

The series will be divided into two plot arcs:

Crunchyroll streamed Mr. Osomatsu 2nd Season as a simulcast. They describe the series as: