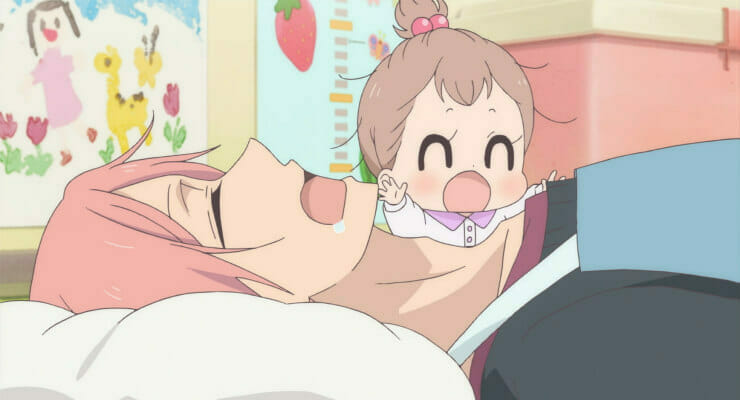 Mike Ferreira: Good evening everyone, and welcome to the Herald Anime Club. I’m Mike Ferreira, and I’m joined by L.B. Bryant, Lydia Rivers, and Anthony Simpson.
Lydia Rivers: Hiii everyone!
L.B. Bryant: Hello!
Anthony Simpson: Evening everyone
Mike Ferreira: Tonight, we’ll be talking up School Babysitters Episodes 3 & 4 – “Now I know why this is on at midnight”, and The Ancient Magus’ Bride Episodes 16 & 17 – “Christmas time is adorably horrifying.”
L.B. Bryant: Which do we want to tackle first?
Mike Ferreira: Let’s start off with School Babysitters.
L.B. Bryant: Good news: There’s a charming and fun side character who makes me laugh on occasion. Bad news: He’s a pedo so there goes that.
Mike Ferreira: Yeah. Once I saw that i was like “Now I know exactly why this is a midnight run.”

Mike Ferreira: I also questioned why he’s allowed within 500 yards of that room if every single person knows this fact.
L.B. Bryant: Yeah, I was really turned off by that but at least it seems that he’s an extreme side character who won’t be appearing very often.
Mike Ferreira: Why do I get the feeling that he’s going to become a regular now that you brought that up? lol
L.B. Bryant: lol Because I’m just talented like that.
Lydia Rivers: So I looked it up because I couldn’t believe such a stale gathering of predictable tropes could possibly do well, even in a shoujo setting, but the manga has been published since 2009.
Lydia Rivers: In LaLa which is a popular shoujo magazine that’s seen much better titles.
Mike Ferreira: That’s shorter than I was thinking, but longer than I expected for some reason
Mike Ferreira: That said, the butler is still a treasure. His dry “Oh good, your voice finally changed” cracked me up
Anthony Simpson: That was great.
L.B. Bryant: That made me laugh.
Lydia Rivers: I didn’t get a pedo vibe from that side character, you guys might be shocked to know. I got a “oh, this mangaka is awful at characterization and the character who’s supposed to make us go AWWW ITS A POPULAR MALE STUDENT WITH AN EXTREME WEAKNESS FOR CUTENESS!” coming off as a pedo. So terrible and awkward.
Mike Ferreira: I can see that

L.B. Bryant: I would’ve agreed with you until he got the bloody nose. That’s what set off my alarm.
Anthony Simpson: I have to agree with Lydia here I didn’t get the pedo type of vibe either.
Lydia Rivers: Nah, he’s basically the person who blushes around puppies or kittens
L.B. Bryant: Hm alright.
Lydia Rivers: Stimulation isn’t always sexual!
Mike Ferreira: For me, it was the friend dragging him off that creeped me out.
Lydia Rivers: But um. Yeah it was pretty awful, awkward, and terrible execution
Lydia Rivers: And that was the “AWWW, LOOK HIS FRIEND IS SAVING HIM FROM HIMSELF!”
Lydia Rivers: I seriously hated that episode.
Lydia Rivers: I did laugh at the lazy sexy adult trope when he said his wagon was animal transport

Anthony Simpson: They have a dad that works all the time and their mom decides to have them remember their dad by showing them movies where he is a bad guy.
Matt Brown: I’m not here, but if I were, I’d say I’m not interested in anything but that old lady’s afro.
Mike Ferreira: It’s not as luxurious as Nabeshin’s, but it gets the job done
Lydia Rivers: Omg, I was sitting there listening to a maternal middle school boy lecture a parent and just
Lydia Rivers: It was the worst kind of surrealism
Lydia Rivers: But I can definitely see how the cuteness and predictability can be comforting to fans of the series.
Mike Ferreira: It’s like marshmallows. They’re light, fluffy, and sweet, but in the end, that’s all there is to it.
Matt Brown: Also they’re made from the ground bones of dead animals?
Anthony Simpson: Its comfort food for me and that is fine.
Lydia Rivers: Definitely. I have my comfort series too. Everyone needs a refuge. :)
Mike Ferreira: Of course. You need those shows to bring those happy fuzzy moments in the day. I snark, but again – I can’t argue that it’s not a decent show.

Lydia Rivers: Ehh…well the implementation of the “popular student gap moe” was pretty terrible. I guess overall it’s not bad tho
Mike Ferreira: Hence “decent” – there are some problematic elements, but it’s just consistent
Mike Ferreira: The sick big bro moment was cute enough, and the kids crashing the horror show was amusing, but it’s pretty much a level series of gentle slopes and easy watching.
L.B. Bryant: I loved watching the little pudgy brother try to squeeze the lemons.
Anthony Simpson: That was so adorable.

Lydia Rivers: Yup! Unless you’re like me and experience unnecessarily drawn out moments meant to bludgeon you into an opinion as torture. Like the celebrity dad “manning up” and “braving up” to “face the crowd” because “aww, the cries of his children gave him strength “. Or like the lemons, yeah. I thought it was cute for the first second, but
Mike Ferreira: Exactly.
Anthony Simpson: Also seeing that the chairwoman having a softer side was great.
Lydia Rivers: Rather than leave something for the viewer and them being free to have whatever feels, the creator is just rubbing our noses in their intentions. Ugh.
Lydia Rivers: Yeah, it was nice seeing that the chairwoman treating her child labor well
Mike Ferreira: Snarky butler’s a better dad.

Mike Ferreira: Moving on, let’s talk about The Ancient Magus’ Bride… a pair of Christmas episodes, surprisingly
Lydia Rivers: Speaking of parents, I love how Chise suddenly has a few
Mike Ferreira: Likewise. I love how she has a family now
Anthony Simpson: Because nothing says Christmas like having Christmas themed episode air in February.
Anthony Simpson: Snark aside I really enjoyed both of these episode.
L.B. Bryant: I liked last week’s episode but this week’s episode was a little boring for me.
Lydia Rivers: The episodes were boring and somehow not! Her associates over the past year galvanized and she was finally able to see her friends clearly. I loved that.
Mike Ferreira: Yeah… I wouldn’t call them boring, but more… mundane?
L.B. Bryant: I enjoyed both but this week’s episode felt like it was a little pointless once they got into the little brother story.
Lydia Rivers: So mundane!

Lydia Rivers: What the hell lol! I was like “…is this like a child trying on his best friends clothes?”
Mike Ferreira: It seems that way! lol
Lydia Rivers: The kid being a curious boy was adorable too
Lydia Rivers: Swarming over him
Mike Ferreira: I kind of loved how the normies reacted to the supernatural in that episode.
Anthony Simpson: I was waiting to see something like that happen in the series.
Lydia Rivers: Watching Elias freak out was pretty funny too
Mike Ferreira: Poor Elias. Stuck in a lake with some random kid, ’cause his millennia-old friend’s an asshole.
Lydia Rivers: Freak out right back…and the first face he put on in his panic was Chise’s lolol
Mike Ferreira: Kind of love how Chise even brought that up right away. Like “What the heck?”

Mike Ferreira: Aniwho, any final words for this week?
Lydia Rivers: The same as every week! More snarky butlers and axolotl puppies!
Anthony Simpson: Good episodes for AMB. More comfort food for Babysitters.
Mike Ferreira: Sounds good. ‘Til next time, remember that if you can rock an afro, you can do anything. Have a great night!
L.B. Bryant: Nighters!
Lydia Rivers: Stay shiny!
Anthony Simpson: Goodnight