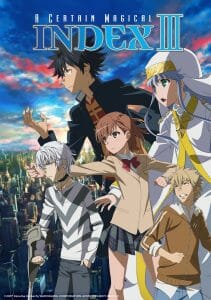 The whole world… that’s a pretty big index to fill!

Earlier today, Crunchyroll announced that they will stream the third season of A Certain Magical Index as part of their global simulcast lineup. The series is available in all regions outside of Asia.

The first episode was added today. New episodes will be added to Crunchyroll on Fridays, at 10:30AM Eastern (7:30AM Pacific).

Kamijo is a student in Academy City, where people use science to develop supernatural abilities. The guy’s got a lot of heart – luckily for a young nun named Index. She’s on the run from a sorcery society that covets the astonishing 103,000 volumes of magical knowledge stored in her memory. When Index stumbles into Kamijo’s life, she find a faithful friend and protector, and while Kamijo’s easily the weakest kid in Academy City, he’s got something else going for him: the Imagine Breaker, an unexplainable power stored in his right hand that negates the powers of others. less