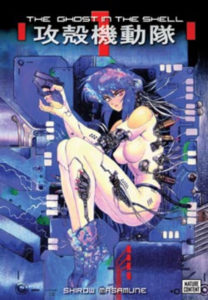 Maybe, just maybe, we must look to the past if we’re to know the follies of the future.

Earlier today, Kodansha Comics revealed that they will re-release Masamune Shirow’s Ghost in the Shell manga in hardcover deluxe editions. Three titles will get the premium re-release::

All three books are slated to hit retailers in 2017. The release will retail the original work’s right-to-left orientation and Japanese sound effects, a first for the franchise in North America. Though a specific release date wasn’t named, Kodansha aims to have the releases coincide with the March 31, 2017 première of Dreamworks’s Ghost in the Shell movie.

Ghost in the Shell 1.5: Human-Error Processor is a spin-off that tells a series of short stories starring Section 9 members. The title ran in the pages of Young Magazine from 1991 through 1996, spanning seven chapters and a single compiled volume. Dark Horse released Ghost in the Shell 1.5 in a single compilation in 2007. Kodansha Comics later brought the title under their own branding in 2012.

Sequel series Ghost in the Shell 2: Man-Machine Interface, ran from September 1991 through August 1997 in the publication, spanning six chapters. Dark Horse shipped the series in singles, before ultimately releasing a compiled book in 2005. Kodansha released the title under their own label in 2010.

Dreamworks is working on a live-action film adaptation of the property, which stars Scarlett Johansson as Major Kusanagi and Pilou Asbæk as Batou. Paramount will distribute the movie, which is being produced by DreamWorks Pictures and directed by Rupert Sanders.