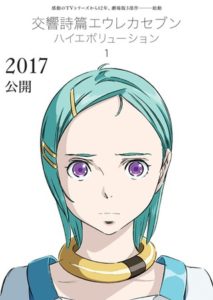 If you’re a fan of Eureka Seven I’m about to make your day!

As previously reported, Eureka Seven is getting a new prequel movie trilogy which takes place ten years before the original series. Over the weekend at Anime Boston it was revealed that the first movie, which is set to be released in the Fall of 2017, will see a simultaneous release in multiple countries including Japan, the United States, the United Kingdom, France, Australia, Singapore, Malaysia, Indonesia, and Thailand.

Stay tuned to this site for more information regarding when you can start throwing money at your computer monitors to buy tickets to see these movies at a theater near you.