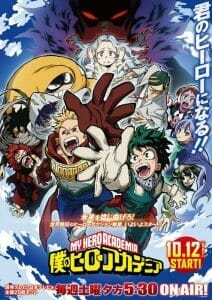 Earlier today, Crunchyroll announced that they will stream My Hero Academia in the following regions starting October 12:

Hulu and Funimation will also stream My Hero Academia‘s fourth season on October 12. Funimation is also producing a SimulDub, which will stream on FunimationNow. A specific premiere date for the adaptation has yet to be confirmed as of press time.