Do You Love Your Mom and Her Two-Hit Multi-Target Attacks? Volume 2 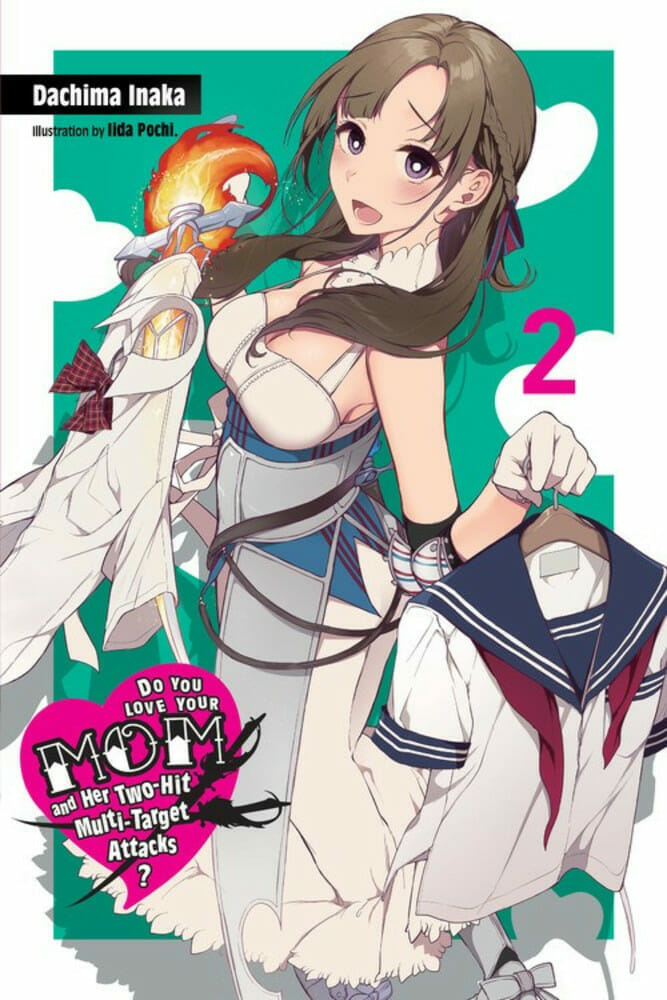 The second volume of Do You Love Your Mom and Her Two-Hit Multi-Target Attacks? has finally hit retailers in the west. In my review of the first volume, I found the title to be charming in spite of its iffy premise, and was somewhat hopeful about the story as a whole.

Before I begin, though, I have to note that i really appreciate how Volume 2 starts off. It begins with a brief prologue, in the form of a government survey filled out by main character Masato. It shows that he’s made some baby steps in terms of his relationship to his mother Mamako, though it’s clear he still has a way to go. Much like the first volume, the chapter titles are chuckle worthy, if a bit on the nose in regards to what happens within. That said, my personal favorite this time around comes courtesy of Chapter 3: “The Graffiti on that Wall is a Beautiful Memory but the Fist and Foot Marks are Best Forgotten. (We Should Really Get Rid of Those. <w<;)”.

Where the first volume poured the foundation for the series, this new installment begins to build the story proper. This time around, Masato and crew find themselves enlisted in a week-long “Accelerated Adventurer” course at the university town of Mahweh. On the carriage ride over, Masato meets the lovely Cleric maiden Medhi. In typical teenage boy fashion, he falls head-over-heels for the girl as his “ideal heroine.” If you’ve read any other isekai titles, you know exactly what I’m talking about. He runs into a big roadblock, though, and it’s surprisingly not Mamako.

This time around, the big force of conflict in this battle of hearts is Medhi’s mother, Medhimama. (A++ effort, there, author) As the name implies, Medhimama is Medhi’s mother who, while elegant, leaves an initial impression of being an overbearing helicopter parent. You know the type; they’re the ones who strive to live their failed attempts at glories through their kids, and push them to be perfect at everything, regardless of the cost.

In short, Masato and friends have landed themselves in a fine mess… er… .again.

In this volume, it becomes apparent that a narrative formula is beginning to fall into place. Masato and company come across a parent-child relationship with some sort of issue. Driven by some force or another, they’re then forced to work out how to fix it. In the case of the first volume, this was present in the rather… complicated relationship between Wise and her selfish mother.Volume 2, meanwhile, takes things to the opposite extreme. Through it all, Medhi serves as the child who bears the burden, while secretly harboring disdain for her parent’s burdensome treatment. As one would expect, it’s impossible to bottle up all of those feelings forever, and they eventually air themselves sooner or later, in this case, in a way that’s beyond destructive. In this light, the Medhi arc provides some really heady and serious family drama that I didn’t expect, which made for a more engaging experience for me as a reader.

That said, to get to the good stuff, one must slog through the less desirable elements of the story. “Less desirable” in this case being the cringe-y momcon humor and genuinely awkward fan service, which are peppered a fairly liberally throughout this volume. The momcon gags were fairly novel in the first volume, with Masato constantly being put off by his mom’s delightful antics. Now, though, the act is growing more dry than week-old bread. Likewise, the awkward fan service is not really inspired on any level, and comes across as unnecessary. I mean, one particular example involves Mamako in a school swimsuit, plus a sea anemone. I’ve seen enough anime to know where this movie is going, and I really don’t want to be there.

To be frank,, the story’s main point came to me about halfway through this volume. Do You Love Your Mom and Her Two-Hit Multi-Target Attacks? is, first and foremost, a story about parenting and how to work out the best balance between mother and child. Beneath the isekai fantasy tropes, the momcon cringe humor, and the awkward fan service, and there’s a fairly strong family drama at the narrative core. The author best describes this line of thought in this volume’s afterword: “This is a story about parents and children…. The biggest challenge comes from just how many things can’t be made perfectly clear.”

Inaka-sensei’s message is a powerful one, as these kinds of relationships can be wrought with great difficulties, as practically anyone can attest to. This increases the story’s relatability, and really expands its message to reach not only its target audience, but also other adult readers, like yours truly.

I will continue on with this series. Despite the bad elements, a strong family/relationship drama can be found beneath the story’s surface . And, so long as the problematic bits curtailed, to place the drama is at forefront, then things should be continue to be enjoyable. The promise of the story holds strong here, and I hope it continues with the subsequent volumes.