I’m A Behemoth, an S-Ranked Monster, but Mistaken for a Cat, I Live as an Elf-Girl’s Pet, Volume 1 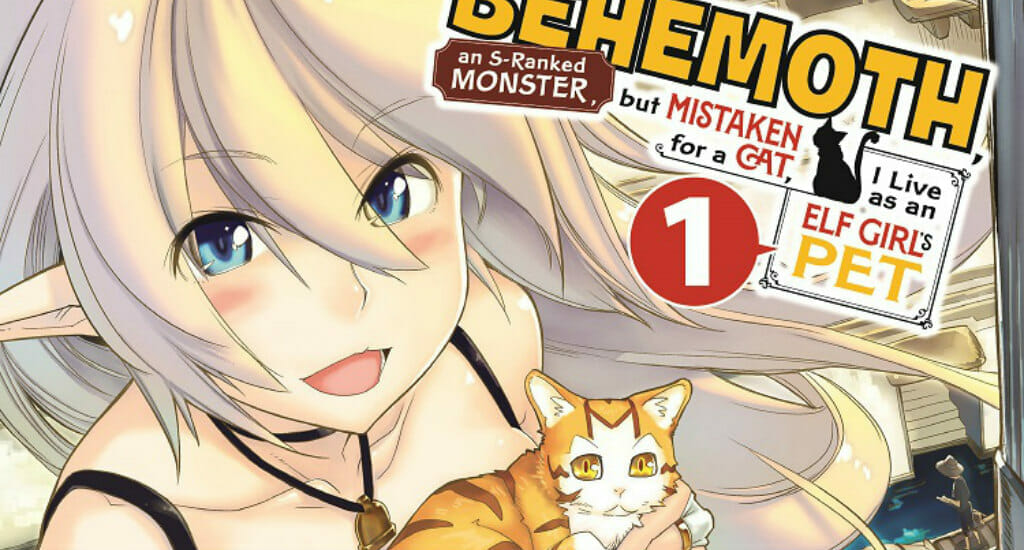 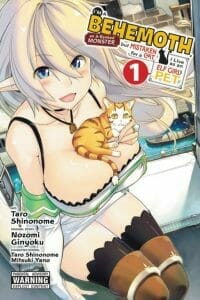 Before we begin, full disclosure: I missed the parental advisory warning for explicit content when I signed up to review I’m A Behemoth, an S-Ranked Monster, but Mistaken for a Cat, I Live as an Elf-Girl’s Pet (“Behemoth”, henceforth). I just saw the adorable kitty on the cover and was hooked. Given that, let me be clear: The warning is apt. There is explicit content to be found, here. I’ll discuss that in a bit.

The titular Behemoth is actually a knight, who was reincarnated as a Behemoth cub named Tama. Even as a cub, though, he’s pretty fearsome, capable of surviving a tussle with an Earth Dragon. Mind you, he doesn’t win that skirmish. Rather, the dragon calls out “Youuuuu weaaaakliiiing” as Tama flees with his tail between his legs. After his escape, Tama collapses. As fate would have it, an elf girl named Aria comes to Tama’s rescue as she adopts him as a pet.

The world itself is that of a city on top of an underground labyrinth. The further down one goes, the tougher the monsters they encounter. It’s hard to know for certain given how standard some of the tropes have become, but I felt like there were several callbacks to The Tower of Druaga. There’s also a guild with quests like we see in KonoSuba. That said, much of this is really quite standard by this point. Anyway, Tama retains his knight’s sense of honor, so he takes Aria to be his master. The plot is all set up to be a fairly cute story of companionship and adventure.

Then things take a turn.

We meet the guild receptionist “Anna.” Anna’s full name is “Arnold Holzweilzenegger.” Anna looks like Arnold Schwarzenegger as Mr. Freeze dressed in S&M gear. Anna even uses ice magic. As an aside, the name “Holzweilznegger” is also a dick joke in German. I’m really not sure if I should be shaking my head, or tipping my cap at the effort.

Aria herself has a couple of secrets. The first is that she’s an adventurer who makes her living doing quests in the upper levels of the labyrinth. Tama assists her on one such quest and reveals his secret that he’s not a normal feline. Aria clues in, but believes him to be an Elemental Cat, which leads to Aria’s second secret. Elemental cats can grow to be two meters long, and can crossbreed with other species when in heat.

Aria pushes the bestiality angle to the point that Tama wonders “Master, are you an elf or a nymph!?”

I had to put the book down when Aria took Tama with her to the bath and the innkeeper made a dirty joke too basic for me to reprint here. This isn’t the most highbrow of manga, but some of the writing was genuinely hackish. That’s not why people are reading Behemoth, though.

The main antagonist in this first volume is a noble named Kussman (“kuss” means “kiss” in German), who’s as arrogant and vile as one would expect. Without giving too many spoilers, the resolution to the conflict between Aria and Kussman occurs off-camera. More important, though, the important lesson we learn from this conflict is the series will not be about exploiting Aria. I am grateful for that.

That said, ultimately, your enjoyment of Behemoth might well be determined by your ability to withstand writing such as this:

“I thought those bouncing melons would make close-quarters combat a challenge, but it seems they can maneuver independently in three dimensions so as not to obstruct her! It’s a miracle! My master’s bosom contains a sacred power!