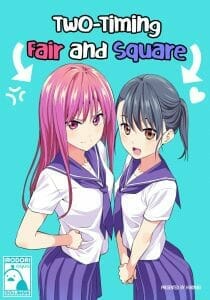 As recently as a year ago, Rolling Stone published an article, which states that approximately four to five percent of the population in the United States practices polyamory (ethical non-monogamy). I don’t know what the numbers are outside of the United States, but considering that the population of the country is 327 million, that’s quite a large swath of the people living here who are either currently engaged with multiple romantic relationships or are open to the idea. This idea fascinates me, so when the opportunity arose to review a doujinshi that attempts to paint the practice in a positive light, I jumped at the chance. Does it do the act justice though?

Two-Timing Fair and Square is a doujinshi manga from Aho-Girl author Hiroyuki, which attempts to show audiences what it’s like to enter a poly relationship. In this one-shot, the main character is a guy named Naoya. A girl named Tomomi confesses to Naoya, but he’s already dating another girl, named Saki. Still, he finds Tomomi attractive.

Rather than turn Tomomi down, Naoya, asks Saki if he can have her consent to “two-time” her with Tomomi, and date them both at the same time. Saki replies in exactly the way that you’re probably imagining. After some reasoning (and flat out begging from both Naoya and Tomomi), Saki agrees to try it out for one week. With that reluctant approval, the trio starts living together in Naoya’s house.

I have to applaud Two-Timing Fair and Square for showing many of the very normal and common problems that couples face when entering the world of polyamorous relationships. At first, Saki is very reluctant to even consider the idea of polyamory, stating that couples are supposed to be exclusive before she finally relents. In reality, this is a fairly common reaction to the idea of opening up a relationship, particularly if it’s raised out of nowhere. In addition to the initial rejection, it also shows some of the other trials that throuples inevitably go through, like coming out to family members and figuring out sleeping arrangements (though their version of getting through these problems are hurried along due to the short story format).

Sadly, this is roughly where the positives end for this tale.

The title is plagued by more than a few issues, the biggest of which is a lack of depth. Simply put, there’s nowhere enough time to explore any of the issues that are brought up within these pages. After the initial shock wears off on Saki and she agrees to open up the relationship, the title becomes a whirlwind of activity as very few pages pass between Naoya hurriedly getting them living together and proposing a threesome between them. It all feels so terribly rushed that I can imagine people actually imagining that this is what polyamorous relationships are like, only to walk away with a negative opinion on the whole concept.

A story beat that was revealed towards the end of the story presented a second glaring issue. Basically, Saki reveals that she and Naoya have never even kissed, let alone made love. I couldn’t help but feel saddened as I read this, because a common pitfall that people fall into when it comes to poly relationships is rushing things too much. Too often, people open the relationship up well before it’s mature enough and strong enough to handle the extra person, which places a strain on all parties involved. While the ages of the characters are never actually mentioned, it does make me wonder if this romantic trio will survive some of the hurdles that are coming towards them. Simply put, the initial relationship is still blossoming and figuring out what it wants to become.

What’s most disappointing of all, though, is the fact that the ending is left entirely open, with no indication that there will ever be more. This manga was created as a one-shot for Comiket 96, and there’s no real way of knowing if it did well enough to warrant further issues. This proved vexing for me, and made me quite annoyed.

Overall, I absolutely loved the concept behind Two-Timing Fair and Square, and really wished that I was more impressed by what I saw. If this title were given a real chance to succeed with a more even hand and a proper pace, I would absolutely give it a second chance. Sadly, as it is now, the title leaves a bitter taste in my mouth that will be hard to get rid of.